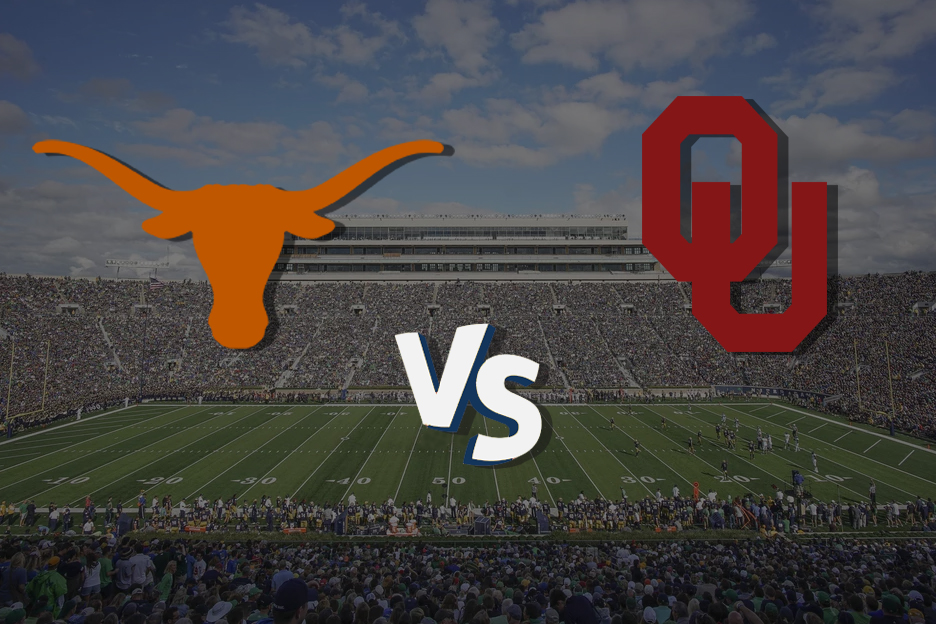 This year’s Red River Showdown was one of the most entertaining games of the college football season. The rematch this Saturday in the Big 12 Championship could be just as intense.

The Texas Longhorns defeated the Oklahoma Sooners 48-45 in October on a last-second field goal. That was after the Sooners had scored 21 unanswered points. There were 1,033 total yards. Three Oklahoma turnovers ended up making a huge difference.

This game could be much of the same in the points and yards department. Oklahoma is the best scoring offense in the country and the Longhorns have a highly-rated pass offense and completion percentage (25th).

But Texas has been improving defensively, having given up only 27 points combined in the last two games. And though Oklahoma is still poor on defense even after a coordinator change, they are at least causing more turnovers now.

QB Kyler Murray continues to make up for any flaws on D with Heisman-like stats. He has a lot of help from deep-threat Marquise Brown and his fellow wideouts. The Sooners also possess three great runners in Murray, Trey Sermon, and Kennedy Brooks.

It’s part of the reason why they are 8-point favorites. It’s clearly a game Oklahoma wants to own all the way through to make sure they’re in the best spot to get into the playoff.

But Texas is clearly much more prepared on the defensive side of the ball. Their run defense is a major strength, as is their red zone unit. But with a shaky pass defense, it’ll be interesting to see if they can make a couple of key stops through the air.

So who has the advantage? Here’s the breakdown of these two bitter rivals.

In his last game against Texas, Murray threw for four touchdowns and over 300 yards. He’s only improved in this offense since then.

This is a unit ranking 1st-to-3rd in every S&P category, including 1st in overall offensive value. With Murray possessing 37 passing touchdowns and the 4th-best completion percentage in the country, it’s easy to see why.

Between Brown and CeeDee Lamb, they’ve compiled well over 2,000 yards and 19 touchdown receptions. There are seven players on this offense with at least seven non-passing touchdowns.

They’re the most balanced offense in the country too, ranking in the top-10 for both rushing and passing.

And in tight situations, Murray is absolute money. The Sooners are 4th in third-down offense and have plenty of key 4th-down conversions as well. The best example was the QB’s key run to put West Virginia away last week.

They’re ranked as the most explosive offense in the country as well, a number combining rushes over 10 yards and passes over 25. And when those big plays get them deep inside the opponent’s territory, they have the 22nd-best red zone offense to finish things in close.

This offense is truly dynamic at any place on the field and in any situation. Their protection of Murray isn’t bad either, although they only have the 64th-ranked O-line when it comes to sack rate on long-yardage situations. But pointing that out is some extreme cherry-picking.

The Texas pass-rush might not be good enough to take advantage on longer downs, as they have the 95th sack rate in these situations. But it does help to have the 6th-ranked red zone D to combat the potent nature of Oklahoma’s offense.

But getting them into 2nd/3rd-and-long situations and not getting scored on by long completions will be difficult. They do have the ability to bring some pressure with Charles Omenhu. He has 8.5 sacks this season.

Getting LB and leading tackler Gary Johnson (5.5 tackles-for-loss) back from suspension will be big too after he missed the Kansas game. He will continue to be a force with fellow LB Anthony Wheeler (six TFL).

Securing stops at the second level will be imperative for this Longhorns defense. They are middle of the pack against the run and allowed 7.2 yards-per-carry to Oklahoma in their October clash. Those numbers must improve slightly to make Oklahoma at least somewhat one-dimensional.

But as it’ll be on the other side of the ball, simply getting a few stops and a key turnover or two could be the difference. The Longhorns simply aren’t equipped to stop Oklahoma’s air attack in the more open parts of the field. Holding them to field goals in-close with that sturdy red zone defense will be huge.

The Longhorns hit a bit of a funk moving the ball the last two weeks. The defense backed them up, but only 24 points in each of those contests is surprising.

Then again, they weren’t playing an awful defense like Oklahoma’s either.

Sam Ehlinger is still an extremely reliable quarterback with valuable playmaking abilities. He’s by no means like Murray out of the pocket. But he’s a tough, skilled, and heady quarterback that leads the 26th-best offense according to S&P-plus.

This isn’t a very electric offense, but it is one that can keep the chains moving. A lot of that is thanks to WR Lil’Jordan Humphrey. He has 72 receptions for over 1,000 yards and eight touchdown grabs in 2018. He forms a dependable combo with Collin Johnson, who has six TD receptions and 768 yards.

Keaontay Ingram will need to come back and play big against Oklahoma as he did in their first matchup. He had 86 yards and 6.6 per-carry in that game. But his game has declined in the past couple of weeks right along with the rest of the offense.

They could get a break with the Sooners sporting the 100th-ranked defensive efficiency according to FEI and placing dead-last in turnover rate. But their stripping of WVU QB Will Grier twice for scores shows they have some hope in the latter department.

Still, this is a team that gave up a combined 189 points over their last four games. Only one of those opponents was ranked, and one of them was Kansas.

This is a Texas offensive line that can out-muscle this defensive front. And they’re playing a team 104th in stuff rate (stopping plays at or behind the line) and 127th in power success (stopping short runs on 3rd or 4th down). Oklahoma also has one of the worst sack rates in the country.

Texas can counter Oklahoma’s poor short-yardage defense with a 46th-ranked stuff rate allowed and a top-25 team on 3rd down. Ehlinger has been known to be able to get those tough yards by himself.

If they can get some timely runs from Ingram again, Oklahoma could give up another 40-plus points to a team that usually dominates time of possession.

1. Keep Murray Off the Field: Oklahoma can strike quick. But Texas needs as much rest for their defense as they can get.

The Sooners’ fast-paced offense will give them plenty to deal with as it is. It’d at least be better if they weren’t completely gassed early in the second half. That’s where the Longhorns’ 18th-ranked time-of-possession comes in.

They need Humphrey to make his big chain-moving grabs and get Ingram going for healthy chunks of yardage all the way down the field. They aren’t a big-play offense (105th), but it’d be just as good if they got six or seven-yard chunks at a time.

Oklahoma is 108th in 3rd down defense. They have no excuses not to have long, successful drives.

2. Hold Them to Field Goals: They have that red zone D for a reason. Even if Oklahoma storms down the field on them, they need to stand tall where they’ve proven time and time again to be able to.

The Sooners are strong at finishing drives, but Texas may have the smallest of advantages here. In a game this wide-open that could still come down to a play or two, this is a huge key for the Longhorns.

3. Force Long Third-Downs: Yes, Oklahoma can get huge gains all at one time. They have a great QB and wonderful wideouts for that. But this will be Texas’s best chance.

They’re much better against the run (36th) than the pass (103rd) and need to not let Sermon beat them. Murray will get his yards with Brown. That’s almost a given. But they can’t let them become extremely balanced.

If they get them to 3rd-and-long, Oklahoma becomes worse at protecting Murray (64th) and Texas gets to the QB more (52nd in sacks). It’s not much, but it might be enough to get those few stops they need.

1. Feed Off the Turnover Success: Oklahoma is not a team that has caused turnovers much. But after getting a couple against the Mountaineers last weekend, they need to feed off that success.

Ehlinger has only thrown four picks all year. Texas is 27th in turnover margin. But if they do get in trouble even once with a turnover, this is a completely different game. For being a big 12 offense, they are very compact at times.

Any kind of disruption would do them a lot of good. It sure showed in the WVU game.

2. Live in the Air: Murray is the one who got them this far and his connection with Brown and Co. is only getting better. It’d be nice to have the run game going too, but that will come with the air connections deep.

This is a Texas secondary that’s been better as of late but has also been playing QBs nowhere near the talent of Murray. Same goes for the wideouts.

3. Be Disciplined: Oklahoma doesn’t even place in the top-100 of fewest penalties. They’re also 83rd in turnover margin.

Texas has their own flag issues from time-to-time, but not nearly at the same rate. And as I said before, they have a top-30 turnover margin. Oklahoma must reduce this as much as possible.

Their three turnovers against Texas in October were huge. In a game where the Longhorns never turned it over, that was the difference between a win and a loss.

Oklahoma is working with the revenge factor. That at least counts for something.

They’re also probably playing for a shot to go to the playoffs now that Michigan has lost. Ohio State could jump them, but not if they have a convincing win. If Alabama beats Georgia, paired with a Sooners’ win, they’d have a great chance of being there.

I just think with that much on the line, they’re going to come out firing on all cylinders.

Texas will control the ball for a good amount of time. But they’ve lost a little bit of punch on offense, even though Sam Ehlinger is probably healthier than he’s been in a while.

Oklahoma is probably the only team in the country who can get by with such a terrible defense. Texas will score over 40 on them, but they don’t pose the same threat down the field that West Virginia did. I thought the game in Morgantown, in a way, was the Big 12 Championship.

The Sooners won’t be taking Texas lightly though given the payback they want. I think there’s just too many options for them on offense to be kept up with by Texas.

It’ll be close until late. But eventually, Texas will get caught up in the wash.