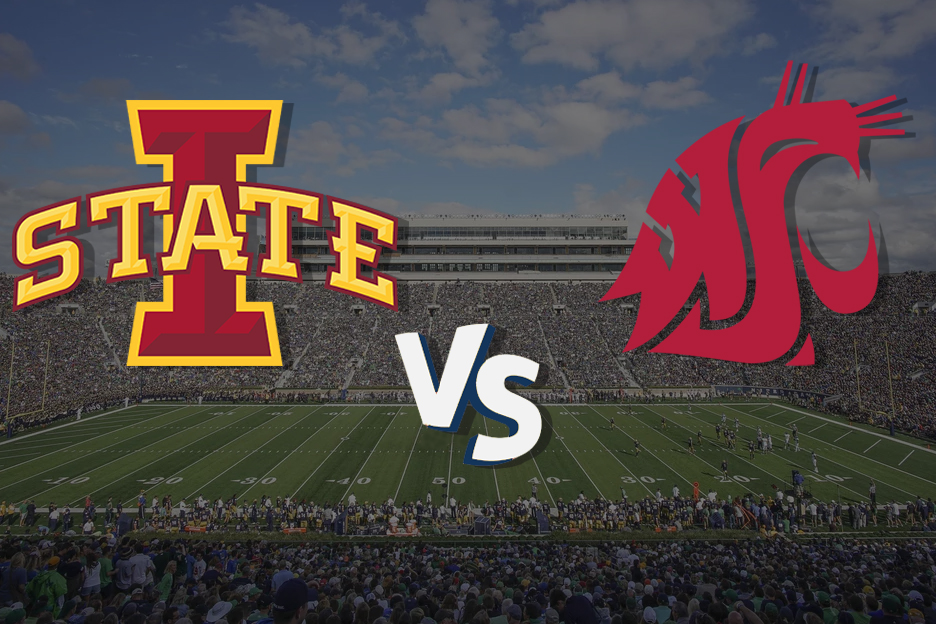 The nightcap for Friday’s trio of bowl games features a pair of nationally-ranked squads which were both hoping for a better outcome to the 2015 season. The 8-3 Iowa State Cyclones will be taking on the 10-2 Washington State Cougars in the Valero Alamo Bowl.

Iowa State was a big factor in the Big 12 in 2018, but the team remained a step behind the conference powerhouses. For much of the year, it was looking like it was Washington State’s time in the Pac-12, but the team fell short and didn’t even make it as far as the conference title game.

Will a pair of disappointed teams come into this bowl game with something to prove, or will they view the fact that they fell short of a loftier game as some kind of slight which ultimately impacts the product they put on the field? That question only adds to the intrigue of what could very well be the most entertaining tilt of a solid Friday slate of bowl games.

Let’s break down this matchup in full detail, starting with the game line.

Iowa State closed out the regular season with a ranking of #24 according to the College Football Playoff committee, but the team didn’t start out like a squad that was on the right track. The Cyclones dropped their first two of the year to in-state rival Iowa and Oklahoma before righting the ship in big league fashion. The team closed out the year in an incredibly strong way, going 8-2 in their remaining games.

Washington State opened up the season with am ark of 3-1, but they would kick it into overdrive from that point. The Cougars ripped off seven straight wins and cracked the Top 10, and the stage was set for them to head to the Pac-12 title game. Unfortunately, they would drop a heartbreaker to rival Washington in the final game of the regular season, and they were home watching with the rest of us when their in-state rival squared off with Utah the following week.

After starting the year with a pair of 10-point losses, expectations were naturally muted for the Cyclones. They would turn around and become one of the stronger teams in the Big 12 down the stretch, taking down nationally ranked conference rivals Oklahoma State and West Virginia along the way. The team’s lone loss over its final eight came to Texas, a team which was ranked #15 in the nation entering the tilt.

Outside of the loss to Washington in the finale, Washington State’s only other loss same to USC. In hindsight, that was a really disappointing loss as well, as 2018 was a down year for the Trojans. On the bright side, the Cougars scored wins over nationally ranked teams Oregon and Stanford in consecutive weeks in the middle of the year.

Turnovers also favor Washington State, but Iowa State has shown a bit more discipline, as noted by the noticeable difference in penalty yards per game. In short, these two clubs match up pretty evenly, and much closer than the margin in points per game suggests.

There’s no series history to dissect, but we have plenty of bowl game information to pore over. Iowa State appeared in the Liberty Bowl versus Memphis last year and pulled out a 21-20 win. Prior to that, the Cyclones last appearance was back in 2012, a 31-17 loss to Tulsa in the Liberty Bowl.

Washington State has been a regular in bowl season, going 2-3 over their last five with losses in their last two. Last year, it was 42-17 defeat to Michigan State in the Holiday Bowl, while the prior year would see the Cougars fall to Minnesota in the same Holiday Bowl by a margin of 17-12.

Recent Alamo Bowl games have been a mixed bag, with favorites going 3-2 over the last five seasons. Last year, TCU and Stanford combined for a thriller, with the former walking off the field with a 39-37 victory. This year’s tight 3-point spread points to the possibility of another close one being on tap.

Both programs had designs on bigger and better things in 2018, so there is a possibility that one or both sides could be suffering from a letdown hangover. That’s more of a concern for Washington State, a team which had legitimate visions of a Pac-12 championship and lofty bowl spot. That didn’t come to fruition, see we’ll have to wait and see what the Cougars bring to the table.

We’re going to lean to the side that suggests Washington State will head to the Alamo Bowl with something to prove. Iowa State should feel the same entering this contest, so we could easily have a more compelling game than many are anticipating. In the end, we’ll go with the stronger squad on an overall basis to close out 2018 on a high note.