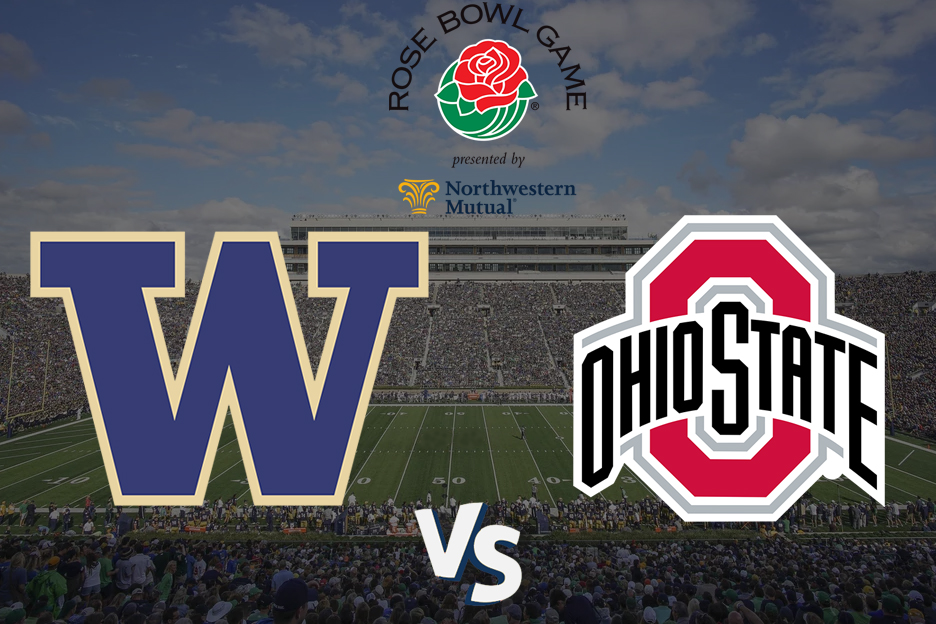 The granddaddy of them all kicks of at 5 PM EST on New Year’s Day. The 10-3 Washington Huskies will square off with the 12-1 Ohio State Buckeyes in the Rose Bowl Game presented by Northwestern Mutual. This is an intriguing matchup of Pac-12 and Big Ten powerhouses which entered the 2018 season with lofty ambitions.

The Huskies opened up the season ranked #6 in the country, and they had their sights set on a Pac-12 title and a spot in the College Football Playoff. They were able to accomplish the former, but a three-loss season kept them out of consideration for a coveted berth. Two of the team’s losses came to Top 25 teams, including the season-opening 21-16 defeat to the Auburn Tigers on a neutral field in Georgia.

The Buckeyes started the year with similar goals. The preseason #5 team was looking to take down the Big Ten and make it to the playoffs, and they would also accomplish one goal while falling short on the other. A big 45-24 victory over the Northwestern Wildcats gave Ohio State the Big Ten crown, but they weren’t deemed worthy of a playoff spot by the College Football Playoff committee.

Will the fact that both squads missed on the playoffs lead to them being more motivated for the Rose Bowl, or will it have the opposite effect and inspire lackluster efforts? We’ll find out on New Year’s Day. In the meantime, let’s take a look at this intriguing matchup in full detail.

After the opening loss to Auburn, Washington would go on to have a five-game winning streak with victories over teams such as the BYU Cougars. The streak was snapped with a tough 30-27 loss to the Oregon Ducks, but the Huskies rebounded to close out the year strong while winning four of its next five. The final victory of the regular season came over the in-state rival Washington State Cougars.

A one-loss season is obviously a pretty stellar one, but something still seemed off about the Buckeyes all year. The team was dominating on offense, posting 40+ points eight times, but there were leaks to be found on defense. That came to a head in a 49-20 loss to the Purdue Boilermakers in a primetime Saturday night game in the middle of the year. Ohio State rebounded from that loss to win its final five.

The win over the Cougars sealed up the Pac-12 North division for Washington, and it set up a showdown with the Utah Utes for the conference crown. The Cougars prevailed in a hard-fought affair by a score of 10-3. It was a down year as a whole for the Pac-12, but a title from one of the Power Five conferences is never anything to sneeze at.

The Buckeyes saved their best for the latter stages of the season, as they closed the year out with five straight victories over conference rivals. Included in that span was a dominating 62-39 victory over the Michigan Wolverines to secure Big Ten East crown. Many were thinking that this was Michigan’s year to take ownership of the rivalry, but Ohio State responded in big league fashion.

Offense is no contest. Ohio State is led by Heisman Trophy finalist Dwayne Haskins, who counts 51 total touchdowns on his exemplary 2018 resume. Washington has the clear edge on defense, but the Buckeyes can still bring it with the pass rush. In short, we have a solid matchup of two powerful teams with differing strengths, and that sets the stage for what could be the game of the day.

These two schools have hooked up twice since the turn of the century, with Ohio State winning both of them handily. However, the last meeting was back in 2007, so recent bowl game history is much more relevant for handicapping purposes. Over their last five bowl game appearances, Ohio State checks in at 4-1, while Washington is 2-3.

The Huskies have lost their last two bowl games. They fell to the Alabama Crimson Tide in the 2016 Peach Bowl, and also came up short in last year’s Fiesta Bowl versus the Penn State Nittany Lions. The team’s last bowl victory was in 2015, when they came out on top of the Southern Miss Golden Eagles in the First Responders Bowl.

The Buckeyes took down the USC Trojans in last year’s Cotton Bowl to the tune of 24-7, but they were smoked in their previous appearance. Ohio State faced off with the Clemson Tigers in the 2016 Fiesta Bowl, losing by a score of 31-0 when the final whistle blew. They appeared in the same bowl game the year prior and fared much better, scoring a 44-28 win over the Notre Dame Fighting Irish.

Favorites are on a 4-0 run straight up in the Rose Bowl, going 3-1 against the spread over that span. Last year, the Georgia Bulldogs squared off with the Oklahoma Sooners, with the former walking off the field with a 54-48 victory. Interestingly, the previous year’s Rose Bowl was a shootout as well, with the USC Trojans outlasting the Penn State Nittany Lions by a final margin of 52-49.

This year, Ohio State is a 6.5-point favorite.

There’s one more wrinkle to consider, and it’s a big one. This will be the final game in which head coach Urban Meyer roams the Buckeyes sideline. You can rest assured that he and the team will be looking to end his tenure on a high note. Ohio State seemed off for much of the year, but they woke up big time as the season came to a close.

Washington is a solid team on an overall basis, but they are no match for a Buckeyes team that’s clicking on all cylinders. Ohio State picks up a big win on a huge stage in Meyer’s final game.