While sports like football, basketball and baseball may take precedence over others in the United States, soccer remains the most popular sport in the world. Soccer’s influence is spreading, though, and it’s never been more popular in the US than it is right now. 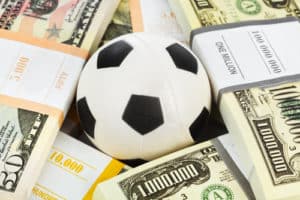 Despite its surge in viewership in the States, most of the world’s truly elite players still play in other countries. The top flights in Spain, England and Germany are considered to be the best of the best as far as soccer is concerned, though Major League Soccer is certainly gaining a foothold of their own.

Still, it may be a while before the world’s wealthiest players look to come play in America during their prime earning years. Who are the richest soccer players on earth? 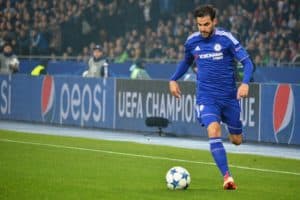 The first of two Chelsea players to make the list of the 10 highest-paid soccer players in the world is midfielder Cesc Fabregas. Following a long, successful stint with both Arsenal and Barcelona, Fabregas joined the Blues in the summer of 2014 on a five-year deal what will pay him an estimated $15 million per season.

In 2011 while he was with Barcelona, the Spanish midfielder reportedly inked a sponsorship deal with Puma after defecting from Nike. The deal was reportedly worth about $25 million over the course of five years. Fabregas has also previously appeared in a Beats By Dre headphone commercial.

In all, Forbes estimates that Fabregas earned a total of $21 million in 2016. $16 million came in salary from Chelsea, while another $5 million came from endorsement deals.

Fabregas has seen his role reduced since proving to be a key cog in the Blues’ 2014 Premier League title. He has made just 12 PL appearances thus far in 2016-17, and has scored three goals and handed out seven assists. 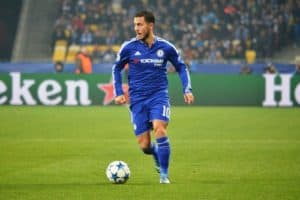 Fabregas’ partner in the midfield, Eden Hazard, is next on the list. Following a standout 2014 season, Hazard and Chelsea agreed to a contract extension that included a substantial raise for the Belgian. Hazard will be on the Chelsea books through the 2020 season at an estimated $16 million per year.

Despite strong interest from Adidas, Hazard agreed to extend his endorsement contract with Nike in 2014. He also reportedly has deals with Topps trading cards and Lotus Bakeries. Forbes estimated that $4 million of Hazard’s $22 million worth of 2016 income came via endorsements.

Following a subpar 2015 season in which he scored just once, Hazard has rediscovered his world class form so far this season. He has already scored 11 goals with four assists in 26 Premier League appearances thus far for the league leaders. 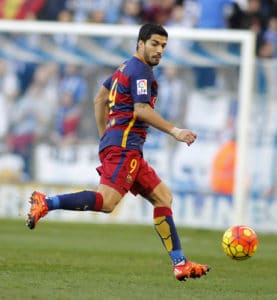 The controversial Uruguayan checks in at No. 8 on the list of highest-paid soccer stars on the planet. After proving to be something of a bargain signing for Barcelona since coming over from Liverpool in the summer of 2014, the Blaugrana decided to extend Suarez’s contract through the 2021 season last December.

Reports indicate that Suarez’s new deal will pay him in excess of $17 million per season. The 29-year-old has been incredibly productive in his three seasons thus far with Barca. He has scored 22 goals in La Liga so far this season, with another three in the UEFA Champions League. In 88 career appearances for the club, Suarez has scored an insane 78 goals.

In addition to the $17 million he’ll earn per season from Barclona, Suarez also nets about $5 million total from sponsors Adidas, Pepsi and Abitab. 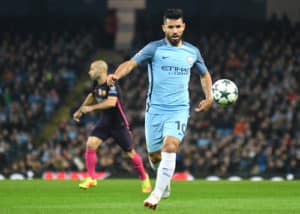 Manchester City’s top goalscorer checks in at No. 7 on the list. While it looked for a while as though Sergio Aguero’s time at Manchester City may have expired when the team acquired young Gabriel Jesus at midseason, a broken foot ended Jesus’s season prematurely. That meant Aguero was back in the fold for the Citizens, and he’s picked up right where he left off.

In all, Aguero has found the back of the net 115 times in just 172 appearances for Manchester City since coming over from Atletico Madrid in 2011. The diminutive striker has a way of making his presence felt just about every time he steps onto the pitch.

In addition to his $17 million salary from Manchester City, Aguero has also featured in Puma ads and also has deals with Pepsi and EA Sports. In all, the Argentine collected about $24 million in earnings in 2016. 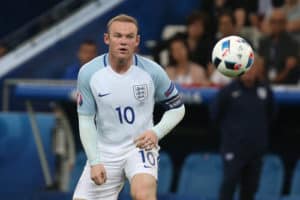 Rooney’s best days are squarely in the rearview mirror, yet he’s still being paid as though he’s one of the best players on the planet. Fortunately, he plays for the richest club in the world, who can easily afford to pay him $20 million.

He reportedly rejected a lucrative offer to leave the Premier League for the Chinese Super League’s Shanghai SIPG last winter in order to stay in England. Earlier this season, Rooney became Manchester United’s top all-time goalscorer when he netted his 250th in a game against Stoke City.

As one of the game’s most recognizable faces for more than a decade, Rooney certainly has his fair share of endorsements. He has deals with Nike, Ford, Nokia, Asda and Coca-Cola and also appeared on the cover of EA Sports’ FIFA video game series in six consecutive years. 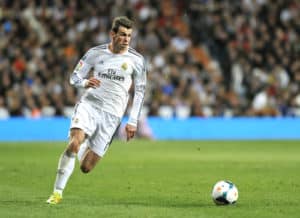 After emerging as one of the top midfielders in Europe during his days with Tottenham Hotspur, Gareth Bale secured a transfer to Spanish giants Real Madrid for a reported world record fee of more than $91 million.

Bale has proven to be money well spent for Real. The Welshman has scored 54 goals in 97 league appearances for his new club, and also helped Wales make a shocking run to the semifinals of Euro 2016.

He has been battling injuries thus far this season, but did recently return from ankle surgery. Through just 14 appearances in 2016-17, Bale has scored seven goals and dished out a pair of assists.

Bale currently has sponsorship deals with EA Sports, Adidas, Lucozade and BT Sport. He reportedly makes in excess of $10 million per year in endorsements in addition to his $16 million-plus salary from Real Madrid. 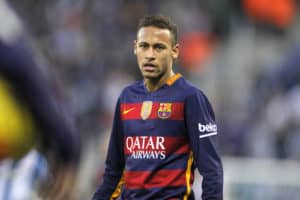 Neymar is just 25-years-old, but he is reportedly the only top-flight player on earth earning more money via endorsements than he is via his club salary. Barcelona pays the Brazilian about $14 million per season, and Neymar takes another $22 million home via his slew of endorsement deals.

He signed an 11-year deal to endorse Nike in 2011, and inked a two-year deal worth $2.4 million to support Panasonic in the same year. He has also signed sponsorship deals with Claro, Ambev, Lupo, Santander, Volkswagen, Denys Pé Baruel and Unilever.

Neymar serves as the third wheel in Barcelona’s world class, three-pronged attack, but that doesn’t make him any less of a force. He has netted eight goals along with 10 assists in La Liga play to this point, along with another four goals and eight assists in seven UEFA Champions League appearances. 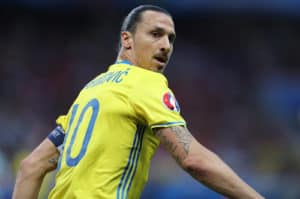 Despite his age, Zlatan Ibrahimovic remains one of the world’s most fearsome strikers. The Swedish international is playing his first season with Manchester United in the Premier League, and the step-up in competition level over France’s Ligue 1 hasn’t troubled Ibrahimovic in the least.

The 35-year-old has scored 26 goals in 46 appearances in all competitions this season, including 15 in Premier League action. He has already helped the Red Devils to a League Cup victory, and hopes to help them finish in the top-four in the PL, as well.

As you would imagine, a player of Ibrahimovic’s stature on a worldwide scale certainly has his fair share of endorsement deals.

In addition to his hefty salary in excess of $30 million from United, the big Swede recently signed a three-year deal with Nike. He has also joined forces with Nivea Men and Microsoft’s video game platform, Xbox. Zlatan also has deals with Volvo, Vitamin Well and has a signature cologne called “Zlatan Ibrahimovic Supreme.”

In all, Forbes estimates Ibrahimovic takes home about $37 million a year. 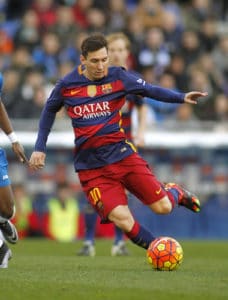 Nobody in the history of the sport has won more Ballon d’Or (best player in the world) trophies than Lionel Messi’s five. The Argentine has also finished second in the award voting four times, and third one other time.

2015 was unequivocally his finest season. He helped his club, Barcelona, win five trophies that season, including the UEFA Champions League. Messi also scored a whopping 48 goals and dished out 22 assists.

As one would imagine for such a decorated player, you see his face all over the place. He featured in a prominent ad alongside Kobe Bryant for Turkish Airlines, and has also graced the cover of EA Sports’ FIFA series four times.

Messi is in the midst of a seven-year deal with Adidas that pays him in excess of $20 million a year, and recently signed a lifetime extension. He also has contracts with Dolce & Gabbana, Air Europa and Pepsi that net him another $8 million or so.

Factor in his $50-plus million salary from Barcelona, and Messi earns just under $80 million annually in all. 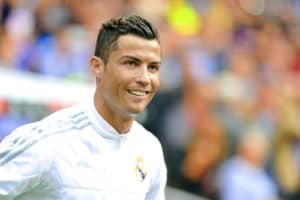 While Lionel Messi may be slightly more decorated as a player, there isn’t a more well-known face among soccer fans around the world than Cristiano Ronaldo.

When he’s not playing, Ronaldo sure spends plenty of time hawking his brand. In 2015, he signed a six-year deal with billionaire Peter Lim worth about $40 million for the player’s image rights. With more than 200 million followers on social media, it’s safe to say Ronaldo isn’t shy about getting himself out there.

He has nabbed other sponsorship deals with Nike, Sacoor Brothers, Tag Heuer and Monster headphones. He has also done deals with Armani, KFC, Emirates and Coca-Cola. His deal with Coca-Cola, worth an estimated $70 million, is said to be Ronaldo’s most lucrative endorsement deal to date.

After helping his native Portugal to glory at Euro 2016, Ronaldo earned Ballon d’Or honors for the fourth time in 2016. So far this season, he has scored 19 goals along with five assists in 22 La Liga appearances for Real Madrid, along with another two goals in Champions League play.

With over $50 million coming from his club alone, Ronaldo earns an estimated $88 million per year.