Should You Use Live Betting to Hedge Bets?

Many gamblers are using live sports betting to hedge the bets they’ve made before the game started. This can be a useful tactic as long as bettors follow some basic principals (the basic idea is to “reduce or mitigate your risk“). 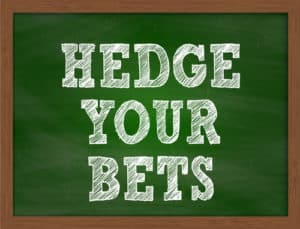 Even if you have never participated in sports gambling before, you are likely still somewhat familiar with the term “hedging your bets.”

That’s probably because this term is something of an idiom that goes beyond the world of betting. The phrase has a figurative meaning that says you are trying to reduce your potential losses on a bet or investment by counterbalancing that loss in some way.

It is essentially a way of protecting yourself from making the wrong decision, and it may pertain to facets of everyday life. Meteorologists famously hedge their bets when it comes to weather forecasting all the time, for example.

In most cases, rather than telling the public that a snow storm is sure to bring several feet of snow, they are more likely to tell us there is a percentage chance of this occurring. That way, if the storm does not bring the amount of snow they may have thought originally, they are not flat-out wrong in predicting it because they said there was a chance it may not actually occur after all.

This also takes place in the stock market and when trying to price agricultural commodities. But it also, of course, has major relevance to the world of betting.

Hedge betting is basically an insurance policy. You’re just trying to soften the blow of a potential loss. Let’s say you placed a bet on a favorite in a given game or match, but may not be feeling particularly confident in it. You can always go place another bet on the underdog, just in case things do not work out as originally planned.

This may look silly on the surface, especially considering placing one bet on each team in a given contest is likely going to result in a guaranteed loss for you of some sort. However, there is a bit of an art to it in that it can also work to guarantee profits if things happen to break a certain way.

So, there are really two separate strategies to know.

As mentioned above, you may choose to hedge your bets if you fear losing a large amount in a bet. If you suddenly lose a bunch of confidence in your initial bet, you may decide to place a smaller bet on the opposite outcome. Examples have a way of simplifying things, so let’s try one here.

Let’s say you placed a $100 bet on the Golden State Warriors (-5.5) to beat the San Antonio Spurs. Perhaps there was some late-breaking injury news that caused you to change your mind, or perhaps it is just a gut feeling that says the Spurs will be able to pull off the upset.

In an attempt to lessen your losses if the Spurs do win the game, you place another bet on San Antonio to do just that. Assuming the game does not result in a push, you are taking on a guaranteed loss one way or the other here. On the other hand, you are also guaranteed to win the bet.

You will likely come out losing a little bit of money considering the odds are unlikely to be even, but that is an easy way to prevent a major loss. Hedging a bet means essentially punting on big winnings, unless the bet winds up being smaller than your first bet.

For example, if you lose some confidence in your first pick but still think it has a good chance of winning, this type of a bet could be a smaller risk than the initial wager. So, if you bet $100 on the favored Warriors and $50 on the Spurs and the Warriors wind up prevailing, you will still turn a profit despite reducing your risk.

You can use odds and spreads to your advantage in order to hedge bets to guarantee yourself a profit of some sorts. Even if the profit is not a huge one, winning is winning, isn’t it?

Let’s say you placed a futures bet at the start of the season on the Cleveland Cavaliers to win the NBA Finals. If they make it to the Finals, you may be able to guarantee yourself a profit by placing a wager on the opponent in the series, as well. Depending on how much you wagered in the first place as well as the odds on the Cavs and their opponent, you can wind up turning a profit regardless of the outcome of the series.

This practice is less common than hedging to try and counterbalance losses, but it can still be a useful tool if the opportunity presents itself.

What is Arbitrage Betting?

Arbitrage betting is something like a cousin of hedge betting. In sports arbitrage bet, the bettor is placing a bet on all possible outcomes of an event that guarantee a profit, regardless of the eventual result. They may also be called surewins, surebets, miraclebets or arbs, depending on where you are.

Most sporting events have two possible outcomes. The only super popular sport that includes the draw as a possible result is soccer.

Typically, you will use odds from two separate bookmakers when placing an arbitrage bet. Different sports books tend to have differing odds, so you can take advantage of any possible edge by placing one bet on each team in a given game at differing sportsbooks.

You are placing a bet on two teams in the same game, just like in a hedged bet. We can use an international soccer game as an example. English bookmakers may favor England in a given soccer game, while the nation England is facing in the game may have unreasonably favorable odds on their own team in order to create a balanced book.

In the instance that you find positive odds on both teams playing in the same game, you are guaranteed to come out with a profit no matter the result of the game.

Is this something I should do often?

No, this is often a dumb strategy if you actually plan to try and make some money when betting on sports. Unless you can find an avenue that allows you to do this for a guaranteed profit, it’s most commonly used as a last resort in order to try and save yourself from losing big.

Hedging to avoid a loss is a strategy that still results in a net loss, so trying to do so as little as possible is the wisest way to go.

Is this often profitable?

Bookmakers are not lazy, so more often than not it is nearly impossible to find a margin for a guaranteed profit at the same book. There are sometimes loopholes to be found of which you may be able to take advantage, but they are rare and may be difficult to find.

In conclusion, hedging your bets is a bit of a last resort type of strategy to help you avoid big-time losses. It certainly is not something you want to make a habit of doing, but if you suddenly have last-minute dread that your initial bet may go terribly wrong, this can be a very useful tool. There are also plenty of ways for it to backfire, though, especially because the winnings from your initial bet will take a hit if it turned out your first instincts were correct.