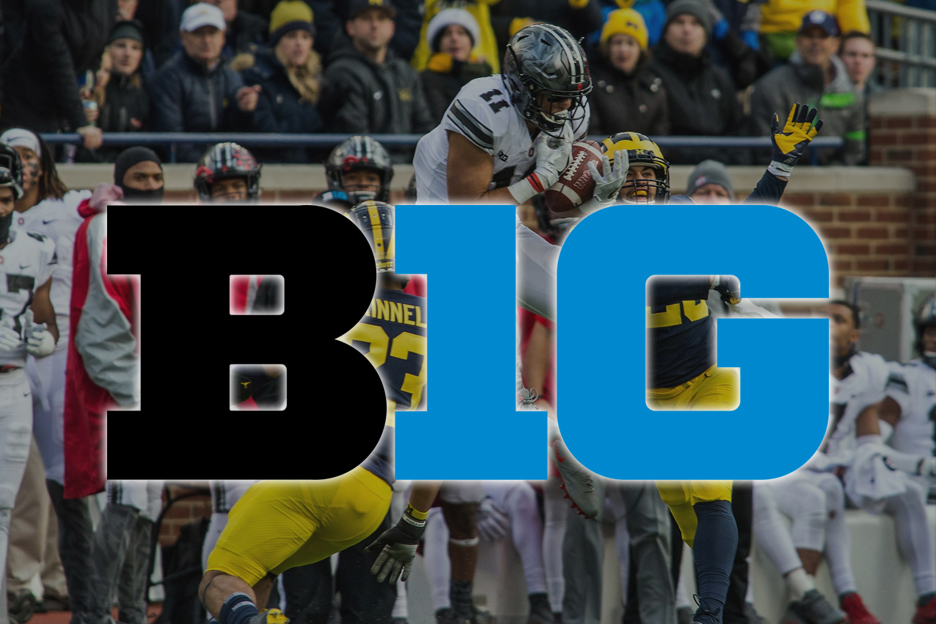 After a remarkable bowl season run (7-1) last season, the Big Ten looks as strong as ever.

The East Division will once again boast four high-caliber teams all ranked in the top 15. They also have what may be the most powerful team in the conference, Wisconsin, in the West Division.

This article isn’t just about those teams though, but about some surprising outcomes for teams or players at Iowa, Nebraska, and Northwestern.

I’ll cover a few newcomers to the limelight and there’ll be an inevitable Scott Frost sighting. But no, I don’t have Nebraska going to the Big Ten title game. Sorry, Cornhusker fans.

This ought to be a positive year for them though, and many other teams in the Big 10. And there’ll be plenty of unexpected developments along the way.

Here are a few I’m most excited about seeing.

Penn State may take a small step back this year. Anyone losing a player with the production of Saquon Barkley definitely would.

But don’t expect Sanders to make everyone wish they still had Barkley. That’s because he’s going to post some awesome numbers in his own right.

This is the top-ranked high school rusher of the 2016 recruiting class. He ran for 6.2 yards-per-carry (YPC) in 2017 and has more than enough skill to break out of Barkley’s shadow.

He doesn’t have the power of the top-five pick but has great strength nonetheless. He also has 4.3 40-yard dash capabilities and is consistently getting better in the passing game.

Losing seven of their top eight tacklers may be the bigger loss if Sanders is as advertised. The Nittany Lions start off with four easier games to get Sanders more acclimated to the lead role before playing Ohio State.

Whether it’s needing great vision between the tackles or needing a burst up the field off a sweep play, Sanders can almost do it all. A full season of progression could have people talking about him nearly as much as Barkley was discussed last season.

And 1,271 yards, the former running back’s standard last season, shouldn’t be out of the question.

While Jim Harbaugh may be a quarterback whisperer, Patterson is undergoing quite the scheme change.

Last year at Ole Miss, Paterson was running an RPO-laden (run-pass option), air raid offense under coordinator Phil Longo. It is a much simpler offense from the aspect of play-selection.

Harbaugh’s playbook is far denser, the play-calls less easy to absorb, and is constructed more like a Pro-Style offense. It’s called the “power-coast” scheme, and it’s one of the more intricate ones in college football.

So right out of the gate, there will be a few stumbles. That’s even if Paterson has had spring and summer to work in the scheme.

Notre Dame is not the first opponent you want when trying to make this switch. Also, as I’ve stated before, Michigan is 0 for their last 16 in road games against top 25 teams. That’s going to be a hard streak to bring to a halt.

With that said, Patterson has the skill, football smarts, and talent around him to make a smooth transition as the season wears on.

Defensively, Michigan is superior to both Michigan State and Penn State this year, and that’s saying something. By late October, they could also have the best quarterback of the bunch too.

And that’s saying even more considering who those other schools have.

If you look at the top 20 recruits coming into the Big 10 this year, they’re nearly all committed to Ohio State or Penn State. But Adrian Martinez is exactly what Scott Frost was looking for.

The new Nebraska coach Frost nabbed Martinez for his spread offense, and it’s clear the true freshman has a future running it. But at the time of this writing, it’s not even a cinch that he’ll be the starter.

Nevertheless, I have the feeling he’s shown enough between the spring game and summer practice to beat out redshirt freshman Tristan Gebbia for the spot. Frost will not lean toward seniority here. And it’s clear Martinez is standing out.

Now, when it comes to competing with all those big-time recruits for the award, that may or may not be tougher.

There are several more coveted recruits than Martinez, but he’s one of the few who’ll have an immediate impact. He also plays at the premier position in the game. That could be a good or bad thing for his candidacy when the game is on the line.

DE Micah Parsons should be dynamic at Penn State and there could be several key contributors such as TE Jeremy Ruckert at Ohio State. Also, there’ll be several recruits at the less-talented schools receiving early reps.

But Martinez blends his potential star power into the fact he’ll be playing on a week-by-week basis. And being a perfect fit for Frost’s offense, he should transition well into the college game.

Iowa has only won 10 or more games once this decade.

But despite Wisconsin being the class of the Big Ten’s Western Division, there is a lot of opportunity for the Hawkeyes this year.

Nebraska won’t arrive onto the scene until 2019. Northwestern will take a step back this year. Illinois is a dumpster fire right now and Minnesota won’t make enough strides to have any more than six wins. Purdue has the scheme in place, but not talented enough players to run it accordingly.

So second place has Iowa written all over it. They also don’t have to play Michigan or Michigan State in across the Big Ten aisle. They don’t have Ohio State on the schedule either, although they might not have minded given the whupping they handed the Buckeyes last year.

Kirk Ferentz will have a stable, disciplined squad once again, one with the second-easiest in-conference schedule (only Illinois will have things easier). Nate Stanley is a vastly underrated quarterback (26 touchdowns, only six interceptions) who is becoming quite efficient.

He has red zone beast Noah Fant (11 touchdowns) back, as well as No. 1 target Nick Easley.

The defense has suffered some big loses, but they always seem to reload quickly on that side of the ball. They have given up 20.4 or fewer points the last three seasons. They can achieve a similar mark this season as well if the linebackers progress quicker than usual.

The defensive ends should bring even more pressure this year. And despite losing All-Big-10 CB Josh Jackson, the secondary shouldn’t have much of a decline.

Iowa State will be a tough game in week two, with their coach Matt Campbell being one of the better offensive strategists in the game. But they get the Cyclones at home and that’ll be their toughest non-conference challenge.

Wisconsin will probably be a loss even in Iowa City. But Penn State may be their only true road test on the schedule unless Purdue miraculously catches them flat-footed after that game.

Northwestern and Nebraska will both have to come to town, and I think Iowa already has an advantage on both sides of the ball against them. Even their special teams unit should be first or second in the conference.

There’s no reason to think the Hawkeyes can’t win 10. Even if they slip up against a team like Iowa State, they’re always in line to pull off an upset every year. They did so against third-ranked Ohio State last year and second-ranked Michigan the year before that.

Don’t count these guys out of anything.

I called this upset a while back but let me get into more detail here.

Northwestern is always a sneaky opponent to have on a schedule, no matter how elite you are.

Even though they’re likely to have a 7-5 or 8-4 regular season, they are still threat because of their focus and physicality. They pride themselves on coaxing their opponents into beating themselves and controlling the line of scrimmage.

And considering that, it could be a perfect time to play Notre Dame.

The Irish are traveling all the way out to California to play a game against Navy in San Diego.

Whether Navy is all that good this year is debatable. But they will always be one of the more physical teams in the country. Their smash-mouth style may not be enough to stay close for four quarters, but the triple-option will certainly cause wear-and-tear for the Irish.

Their reward will be to travel back across the country for another road game in Evanston, Illinois. And even though Northwestern will have their own bruises after playing Wisconsin, they’ll be able to have plenty of rest from home.

Notre Dame’s D-line will be tested a week after getting run at on at least 80% of downs. Clayton Thorson is an experienced and skilled enough quarterback to take advantage of them.

Having a 1,300-yard rusher like Justin Jackson would all but seal the deal here. But even with his graduation, Jeremy Larkin may fill those shoes surprisingly quick.

This is definitely a trap game for Notre Dame. That’s not only because of the road contest against Navy. They also because have a seemingly tougher matchup with Florida State the very next week.

It’s an interesting concoction that could certainly work in the Wildcats’ favor.

While Taylor is certainly a contender, he seems to be stuck behind Bryce Love and Khalil Tate when it comes to Heisman talk.

Love will certainly own the west coast once again. Out of all the defenses he’ll face, only one (Washington) was in the top-20 last year in stopping the run. 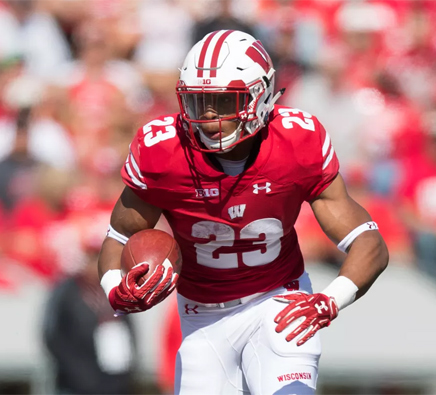 But with K.J. Costello being given more responsibility and Love not having much of a presence in the passing game, his numbers may not change much. If anything, he might see a slight downtick. But the offensive line is almost wholly intact from 2017, so it’s hard to bet against him.

Only a player like Taylor could change my mind. He has a quarterback in Alex Hornibrook who has enough talent to keep defenses guessing. But he’s not going to be relied upon enough to take a bunch of carries away from Taylor.

The running back also has the best offensive line in college football. At least four of them could be All-Big Ten selections. The unit will probably be between Clemson’s defensive line and Ole Miss’s wide receivers in terms of dominant position groups.

And it will give Taylor a boost being on the Big Ten champion, as Wisconsin will be in 2018. Love and Stanford will be playing third-fiddle to Washington and whatever team they play in the PAC-12 championship.

Taylor will also be more involved in the passing game. He had just under 100 yards last year. But with top receiver Quintez Cephus suspended due to sexual assault charges, Taylor’s role in the pass-game could be expanded.

He’ll face some tough defenses for sure, and that’s the one knock most have against his Heisman legitimacy. But he put up 132 yards (6.9 YPC) on Michigan (18th vs the run) last year. He had 130 (5.0 YPC) against Miami in the Orange Bowl.

So it’s safe to say he can play big in big games against vaunted defenses. And he’ll be rewarded for it come December.