College football has been incredibly popular in the United States for decades, but it remains one of the fastest growing sports in the country. While the NFL is the television ratings king, the college game isn’t all that far behind.

The 2016 College Football Playoff National Championship between Alabama and Clemson drew a total of just over 26 million viewers after drawing 26.7 million in 2016. That certainly pales in comparison to Super Bowl viewership, but comparing any other event to the NFL’s championship game is an unfair practice.

So, what should you know about college football? 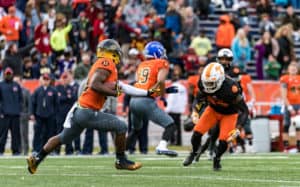 For years, the NCAA’s system for determining a champion in football drew the ire of fans and pundits alike. From 1998 through 2014, college football used the Bowl Championship Series (BCS) to determine a champion.

The BCS used a combination of polls and computer-generated rankings to decide which teams deserved to play for the championship. That was discontinued in 2014 when the College Football Playoff was introduced.

The playoff uses a 13-member committee to choose and seed the four teams that wind up playing in a two-round playoff to end the season. The tournament consists of two semifinal games (single elimination) followed by the College Football Championship Game.

The University of Alabama has been selected to participate in all three College Football Playoffs to this point, though they only won one title (2015). In the other two seasons, they were beaten in the 2014 semifinal by Ohio State and the title game by Clemson (2016).

Alabama leads the nation with three appearances in the postseason, followed by Clemson (two), Ohio State (two), Oregon (one), Oklahoma (one), Florida State (one), Michigan State (one) and Washington (one).

The semifinal games and championship games rotate venues on an annual basis. The two 2016 semifinals were played at the Peach Bowl (Atlanta) and Fiesta Bowl (Phoenix), while the title game went down in Tampa. The Rose Bowl (Pasadena), Sugar Bowl (New Orleans), Orange Bowl (Miami) and Cotton Bowl (Arlington) have all hosted in the past. Levi’s Stadium in Santa Clara, California, will host the 2018 championship game.

The new playoff system is expected to average about $500 million in revenue over the course of the current 12-year deal. After $125-$150 million in expenses, the “Power Five” conferences (Big 12, Big 10, PAC 12, SEC, ACC) split nearly 72 percent of the remaining money. The other five major conferences split about 27 percent of the revenue, while independent Notre Dame receives about one percent. 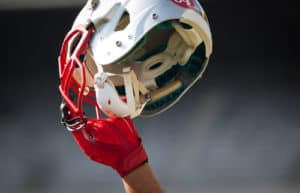 In most sports, a team losing a regular season game is hardly a big deal. As we saw with the 2015-16 Golden State Warriors, a dominant regular season does not always mean you’ll wind up winning it all once it’s all said and done.

However, the regular season is hugely important in college football. Considering the regular season is only about 12 games long for each team, losing more than one or two games often means the playoff dream is over. For example, the four teams that qualified for the 2016 playoff (Alabama, Clemson, Washington, Ohio State) combined for just three regular season defeats.

If you’re a school that plays in a non-“Power Five” conference, even finishing the regular season undefeated doesn’t guarantee you a seat in the playoff.

Strength of schedule is also a major factor in deciding the four teams that will play in the postseason. In the past, many powerhouse teams would schedule small, uncompetitive schools in non-conference games to pad win totals. Nowadays, though, the 13-person committee rewards teams that play tougher schedules. So, teams like Alabama are now more reluctant to schedule games against schools like McNeese State or Western Kentucky.

Should a Bettor Approach College Games Differently Than NFL Games?

While there are some obvious similarities, the college game is rather different from its professional counterpart. Not all rules are the same. For example, the clock stops after every first down in college, which isn’t the case in the NFL. This has a way of leading to longer, higher-scoring games.

There also tends to be a vast talent discrepancy from program to program. While most NFL teams may be largely equal, some powerhouse college teams have a way of completely overwhelming lesser foes. These schools (Alabama, Texas, USC) have a way of recruiting the best high school athletes from all over the country, and they just stockpile their rosters with upper echelon talent.

As a result, you’ll see some crazy spreads in the college game. While few NFL games will have a spread north of 10, it isn’t all that unusual to see a college game bear a point differential far higher. For example, Alabama was favored by a whopping 24 points over Florida in the 2016 SEC Championship Game. Florida isn’t exactly a minnow when it comes to college football, yet books were supremely confident that the Crimson Tide would wallop them.

In a non-conference game earlier in the season, the Tide were favored by 42.5 against Kent State. Perhaps the craziest aspect of spreads like these is that some of these favored teams are fully capable of covering them.

Scoring totals are also astronomical in the college game these days. Super Bowl LI had an implied total of about 57, which was on the high side for an NFL game. However, we often see college games blow that out of the water. A game in October of 2015 between Baylor and Texas Tech, two high-powered offenses, boasted an over/under of 90.5. That game was more the exception than the rule, but it still goes to show how dominant offense is in college football nowadays.

Who Are the Best College Football Coaches of All Time?

While the NFL may be a player’s league, the opposite can be said about college football. There are still countless players that will go down in college football lore, but coaches truly run the show in the non-professional ranks.

Considering a player has a shelf life of only four years (maximum), the insane amounts of roster turnover on a year-to-year basis means that the coaches are really the faces of the programs.

Opinions will vary depending on which part of the country you happen to be in, but most will tell you that current Alabama head coach Nick Saban has clearly established himself as one of the five best college coaches of all-time.

Following a successful stint in charge at Michigan State, Saban was hired by Louisiana State University (LSU) in November of 1999. He would go on to lead the Tigers to a slew of excellent seasons, culminating in a BCS championship in 2003. It was the schoo’s first football title since 1958.

After a brief two-year stint with the Miami Dolphins, Saban returned to the college ranks in 2007 with one of LSU’s chief rivals, Alabama. In his decade-long stint thus far with the Crimson Tide, Saban has led the school to a whopping four national titles (2009, 2011, 2012, 2015) and counting.

Saban’s five championships as a head coach is tied for second on college football’s all-time list, behind another former Alabama coach.

Paul “Bear” Bryant is perhaps the most highly-regarded college football coach in history. While he spent a few seasons at the helm of schools like Maryland, Kentucky and Texas A&M, Bryant is most known for his 25 years in charge at Alabama.

Bryant won six titles at the school and also led the Tide to 13 conference championships. He was the SEC Coach of the Year a record 12 times and was inducted into the College Football Hall of Fame in 1986. He ranks eighth on college football’s all-time wins list with 323 over the course of his 38-year career.

Penn State’s Joe Paterno coached for a whopping 45 years and ranks second all-time with 409 wins. John Gagliardi is college football’s all-time wins leader with 489, most of which came during his 63-year run at St John’s. The top five is rounded out by Grambling’s Eddie Robinson (408), Florida State’s Bobby Bowden (377) and Carson-Newman’s Ken Sparks. 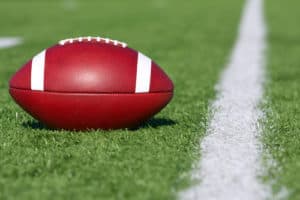 Part of the charm when it comes to college football stems from its unpredictability. Despite the overall dominance of a few programs, massive upsets still take place on a yearly basis.

If you have watched any college football at all, you’ll remember many of the sport’s most indelible moments.

Stanford-California is one of the sport’s greatest rivalries dating way back to 1892. Stanford leads the all-time series 62-46-11, but it was Cal that came out on top in the rivalry’s most memorable game. After John Elway led Stanford on a drive to take the lead late in the 1982 game, four Cal players lateralled the ball five times on the ensuing kickoff with just four seconds left on the clock. In what is now known as “The Play”, Cal players were having to avoid members of the Stanford band that had paraded onto the field prematurely in order to celebrate. Kevin Moen ran the ball into the end zone despite the disruptions of the band, giving Cal a 25-20 victory.

We would also be remiss to neglect Doug Flutie’s Hail Mary in a game between Boston College and Miami in 1984. With the Eagles trailing 45-41 with 28 seconds left, the diminutive quarterback took BC to the Miami 48 yard line. There was only time for one more play, and the Miami defenders doubted the 5’9” Flutie’s ability to get the ball all the way into the end zone on the fly.

Flutie narrowly avoided a sack and hurled the ball from his own 37 against gusty winds an estimated 63 yards in the air to a wide open Gerard Phelan, who had gotten behind the Miami defense. Phelan caught the pass to give Boston College an improbable 47-45 victory.

Perhaps the most memorable play in recent history took place in the Iron Bowl between Alabama and Auburn in 2013. With the game tied at 28 in the late stages, the Crimson Tide were driving in an attempt to win it. The game clock expired when running back TJ Yeldon was forced out of bounds, but Saban argued that there should be one second left on the clock. Replay officials confirmed Saban’s suspicions, setting up a 57-yard field goal attempt with one second to play.

The kick fell short, though, and into the waiting arms of Auburn defensive back Chris Davis. Davis decided to carry the ball out of the end zone with no time left on the clock, and wound up taking it 109 yards all the way into the end zone, giving the Tigers an incredible 34-28 victory as time expired. The loss dashed Alabama’s title hopes that season, as well.