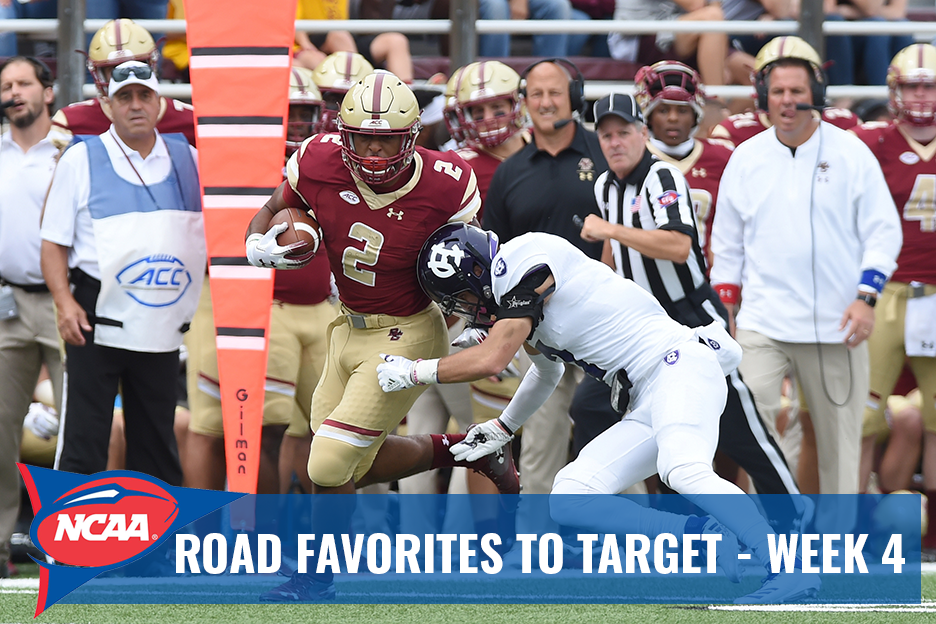 Road favorites again? Yeah, why not? Last week, I went 1-1 with the road favorites to cover away from home last week.

Picking Oklahoma to cover 17 on the road against a team that beat them last year seems rather foolish now that I have the hindsight. I’m not going to whine about it. It was a reach, but why reach if you don’t have to?

Washington came through for me as the other road favorite. They battled in the trenches with the Auburn Tigers for 60 minutes in week 1, so why couldn’t they beat up on a few Utes down in Salt Lake? The (6.5) seemed like it could be a trap but Washington is a very good football team.

This week, I want to look at two games again. We missed out last Saturday on a Hokie bet due to Hurricane Florence scaring off the East Carolina Pirates. Virginia Tech wasn’t thrilled with the Pirates pulling out of their meeting as it was going to be in Blacksburg where conditions weren’t nearly as treacherous.

The Hokies looked at it as the decision to cancel the game would improve the season record of East Carolina and the Hokies would be left with one less victory.

This week, the Virginia Tech Hokies are on the docket once more with no hurricanes on the horizon to stop them.

They will take a ride east across the south side of the Commonwealth to Norfolk where they will be looking to shut out the Old Dominion Monarchs on their “home” field. Hokies travel very well, and a trip to the beach with offseason prices before the weather breaks is rather inviting for students as well as alumni.

The point spread is rather large, but in my opinion, not as big as it could be.

We will stay within the ACC for the next pick.

The Boston College Eagles have been one of the most impressive teams in the ACC so far this year. In their first two games of the season, BC smashed two in-state “rivals” at home. Holy Cross and UMass didn’t have the goods to slow down all-world sophomore running back AJ Dillon.

If you’re looking for an early-season Heisman pick, look no further than Dillon. He’s an absolute stud. The Massachusetts native is listed at 6′ and near 250 pounds! What a monster!

Think about how thick Lebron James is and then remember that he is also around 250 pounds but 8 to 9 inches taller.

AJ’s legs have to be tree trunks.

BC visits West Lafayette, Illinois and the Purdue Boilermakers for another road test. The Eagles survived Winston Salem. Can they survive the visit to Purdue and beat the Boilermakers by 7?

Let’s further break down the chances of these road teams to cover the spread. Home field advantage is huge in college football, so it’s important to pick these games wisely.

40-12, huh? Let’s first see if there are any significant injuries on either side. The Hokies have had an extra week off, although they will likely hedge towards resting those who are still nursing injuries.

I don’t think that will work against them, though. Justin Fuente has recruited very well, and the Hokies have already shown a level of depth in their defense that many experts didn’t think was there.

Bud Foster is one of if not the best defensive coordinator in football. The “Lunchpail” or blue-collar attitude his defenders play with every single week is something to behold. Yes, I’m a fan of Virginia Tech but you can’t deny their defense.

With an offensive-minded head coach in Fuente, the Hokies have improved on that side of the ball each of past few seasons post-Frank Beamer.

9 different players carried the ball and 9 different guys caught passes for VT when they beat another in-state school and ODU neighbor William and Mary. It looks like their depth on defense is matched on offense as well.

This was against William and Mary, who isn’t a big school or very good at football but at least they’ve won a game.

Old Dominion is 0-3 including a 52-10 trouncing at the hands of Liberty University in Lynchburg, VA. Liberty is in my hometown in Virginia, so I’ve been familiar with them since I was a youth.

They have improved significantly as the school has grown to be the largest religious institution in the country. They even joined the FBS a couple years ago.

52-10, though? If VT beats them with the same score, they would cover.

I’m not doubting Liberty could be better than advertised. They have improved their level of talent and play every year for a decade.

The Flames were unstoppable running and passing the ball and the Josh Jackson led Hokies shouldn’t have any problem doing the same.

There is no moneyline as VT should definitely win and the total can be very tricky. The Hokies could absolutely score 50 if not more points themselves. I don’t think a shutout will happen, though. Maybe it will through the first half, but VT will be looking to rest some guys as their schedule is inevitably becoming more difficult.

I like VT to cover the 28 points. My only worry is that Tech got an extra week off. They played so well in the first two games of the season, maybe a week off will break their focus. Maybe not, though.

Forgive me Hokies for saying this, but it’s possible Frank Beamer got a little soft on the kids in his later years. Justin Fuente’s teams, though, have shown they can retain focus from one week to the next.

I like the Hokies to cover (-28) at ODU this Saturday when they turn Norfolk into a miniature Lane Stadium!

When I picked this game a couple days ago, it was (-6.5) for the Eagles. If it had jumped to 7.5, then maybe I would rethink my choice but if they win by 7 you can at least get your money back.

Boston College is an emerging dark horse to win the ACC. Yes, they would have to beat Clemson and their all-world defensive line. Running back sensation AJ Dillon is potential kryptonite for any run-stopper, though.

I do worry about the power of desperation, though, from the Boilermakers. This will be their fourth straight home game to start the 2018 season and they are still in search of win #1.

On the injury front, BC is all clear while the Boilermakers are likely down a cornerback due to concussion protocol and starting quarterback Elijah Sindelar is listed as questionable as he recovers from an undisclosed injury.

BC’s weakness on defense is against the run. If they can hold a double-digit lead through halftime, Dillon should be able to break through against an increasingly more exhausted defense late in the game.

If they can achieve this, Purdue will have no choice but to throw the ball to win.

This game could be a shootout for sure, but I think BC plays better on defense and continues rolling on the offensive side of the ball.

PLEASE NOTE:
The total of 66.5 is huge, but I will stay away. If you look at the moneyline, you’ll see that BC should most likely win. BC potentially has the best offensive talent in college football in AJ Dillon, and I think he will be the difference that makes the game at least a two-score win.

Purdue is giving up over 7 yards per play on defense for the year, and I expect more of the same offensive firepower from the Eagles.

42-31 is my projection with AJ Dillon racking up 2 bills, two hundred yards for the laymen’s.

As we enter week 4 of the college football season, teams are beginning to show their character and true colors. Many times early in the year teams play much lesser competition as a bit of a warm-up before conference play begins.

Even though Boston College and Virginia Tech have each played a conference game, they have each had at least one warm up. The Hokies missed out on a home game opposite the East Carolina Pirates where they were heavily favored.

This week they will have another warm-up if you will when they visit the Old Dominion Monarchs in the Tidewater region of Virginia. The Tidewater includes Hampton, Newport “Bad” News, Norfolk, Virginia Beach, and several other smaller cities.

This region is significant because it is where most of the 3-5 star talent comes from in the state of Virginia. The Hokies used to own the recruiting in that part of the state, but the secret is out and national powerhouses have been stealing Virginia talent from there for nearly a decade now.

Steelers head coach Mike Tomlin, also from the area, said it best “There’s a great deal of confidence in being from this place.”

Its representatives include Bruce Smith, Lawrence Taylor, Deangelo Hall, Kam Chancellor, Mike Vick, and Tyrod Taylor all of which played for the Hokies minus LT.

This is even more reason to take the VT (-28). It will be a home game as more than half of their players are from that part of the state.

Mark it down. AJ Dillon will be your Heisman winner and #1 pick in the NFL Draft should he decide to turn pro after 2018.

The “Man” is 6’ and pushing 250 with breakaway speed. I wouldn’t quite match his skills with Saquon Barkley, but the sophomore is still developing.

BC has yet to throw an interception is 3 games. Hopefully, that jinx will wear off by the noon eastern kickoff time on Saturday.

Even though I’m picking them, I will never like BC. I’ve been salty ever since Matty Ice Ryan brought them back from 10-0 in the last 2 minutes to beat the Hokies while I stood in 6 inches of cold rain for countless hours. It was a rough day, and it took me this long to rebound.

So, just know that the BC pick was hard for me. Therefore, it should be good for you.

Eagles and Hokies to cover!