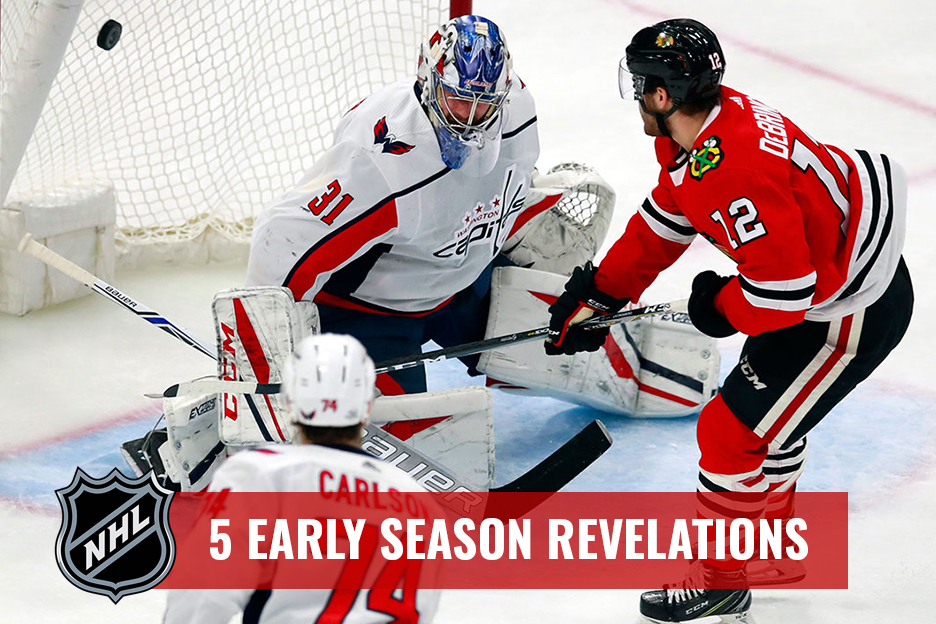 It happens every year.

Things can look pretty simple and straightforward on paper, however, we need to keep in mind that every single team in this league believes in themselves as competitors from the outset. Certainly hunger and work ethic can rise above while some teams actually have more skill than we initially gave them credit for.

With that in mind, let’s take a look at some of the early season surprises so far through the first few weeks of the NHL regular season.

I’m not sure there is any team in the NHL surpassing expectations quite like the Montreal Canadiens.

The Habs are 5-1-2 out of the gate and sit in a three-way tie for top spot in the Eastern Conference with a game in hand on both the Maple Leafs and Bruins.

Many thought the Habs would need a miraculous rebound from Carey Price to get a sniff at competing this season, but this start is most remarkable because they’re doing it with Price sporting some mediocre numbers. Price’s 2.48 GAA is solid, however, that’s more of a team stat than anything. His .906 Sv% is a more accurate mark of his work as a goaltender and that is a fairly pedestrian figure. Most thought it would have taken a season similar to his 2014-15 season when he posted a 1.96 GAA and a .933 Sv% and took home the Hart Trophy in the process.

When you look at the team stats here, you won’t find this team at the top of any leaderboards. Their 14th in offense, tied for 7th in defense, tied for 16th on the power play and 16th on the penalty kill. Other than solid defensive numbers, the Habs are a great possession team as their 52.9% Corsi For% at even strength ranks sixth in the league. 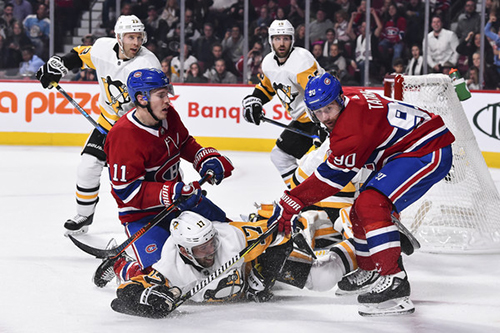 Brendan Gallagher and Tomas Tatar have found some snappy chemistry on the top line and top power-play unit while Jeff Petry has handled number one defenseman duties quite well in the absence of Shea Weber. With Weber back, Montreal’s defense comes that much better.

For now, this club is looking fast and skilled and their pushing the pace. It will be fun to see how they fare when the games get harder into November.

Sure, the Avs were a playoff club last season, but after a 95-point season last year, Vegas had their point total over/under set at just 89.5 entering this season. They also began the season with odds of +4000 to hoist the Stanley Cup, odds that have already skyrocketed to +2000.

We knew the Avs were a good young team, but in a division that includes the two best teams from last season in the Predators and Jets combined with an annually competitive Minnesota Wild team, a solid Stars squad, a should-be improved Blues team and a fully improved Blackhawks team, it was going to be tough for the Avs to repeat last season’s success in what seemed like a stacked division.

It was also tough to see Nathan MacKinnon repeating his 97-point season from last year considering his previous career-high was 63 and was set way back in his rookie year in the 2013-14 campaign. Not only is MacKinnon on track for another MVP-caliber season, he’s brought Mikko Rantanen with him as the unheralded 21-year-old, coming off an 84-point season, is tied with Auston Matthews for the league scoring lead with 16 points. The trio of MacKinnon, Rantanen and Gabriel Landeskog have combined for 43 points in 27 games on the season.

As good as this line has been, we need to give credit to this Avs back end as well. The quiet offseason acquisition of Ian Cole has paid off already as Cole’s 24 blocked shots ranks third in the league while he’s logging well over four minutes on the penalty kill. It’s not a flashy group, but the Avs’ defensive core has been excellent and ranks first in the league with just 2.11 goals against per game.

You don’t get good defense without good goaltending. In his contract season, Semyon Varlamov paces all NHL goalies with a 1.64 GAA and a .953 Sv% in six starts. Backup Philipp Grubauer owns a .925 Sv% in three starts. It appears there is a nice combo of stout defense and rock-solid goaltending in Colorado.

They’re firing on all cylinders and it’s almost impossible to imagine this club as a non-playoff club as per the preseason expectation.

The Hawks endured a devastatingly poor season last year, but there was good reason for that.

While every team deals with injuries, the first-half injury to Corey Crawford crippled this team. Crawford didn’t play a single game after December 23rd last year thanks to what we now know was a concussion. The Blackhawks were one of the league’s top defenses with Crawford prior to the injury and were one of the league’s worst post-injury. It wasn’t hard to see they needed their netminder back healthy.

It took awhile, but Crawford is back. It’s a good thing too because Chicago has a 5-2-2 record on the season despite yielding 3.67 goals per game, good for 27th. He’s made three starts since his return, and Crawford has produced a 1.69 GAA and a .946 Sv% while allowing just five goals in those three starts.

Chicago Blackhawks’ Offense
Not only is Crawford back in full form, but the Blackhawks’ offense is also looking like the dynasty days as their 3.67 goals per game is tied for fifth in the league. The ‘Hawks are driving possession as well as their 52.3% Corsi For% at even strength ranks ninth in the league.

Duncan Keith and Brent Seabrook are well on their way of putting last year’s career-worst seasons behind them as the duo has already combined for 11 points on the season. Less has been more with these veterans this year.

The Central is still a tough division, especially with the Avs playing the way they are, but Chicago appears to be trending in the right direction and is turning heads out of the gate.

The Hurricanes have not only jumped out to a 5-3-1 start to the season, but they’ve been flat out dominating possession more than any other club in hockey.

The ‘Canes 62.3% Corsi For% is by far the best mark in hockey while they are outshooting teams by an average of 17.3 shots per game, light years ahead of second-place San Jose and their 11.3 mark.

Sebastian Aho has taken that next step forward in his third season in the NHL. The 21-year-old Finn has four goals and 14 points through nine games on the heels of a 29-goal, 65-point campaign on a mediocre Hurricanes offense last season. The top line of Aho, Teuvo Teravainen and Michael Ferland have combined for 31 points on the young season.

One reason we need to be cautious with this team is due to goaltending. Carolina is a rare example of a team with excellent defense but poor defensive numbers.

The Hurricanes are allowing just 24.4 shots per game, second fewest in the league, yet they’re allowing 2.89 goals per game, good for 16th. The .882 save percentage they have received from their goaltenders ranks 26th in the league and goaltending is the sole reason why you don’t see Carolina near or at the top of the league in defense.

The ‘Canes will need Scott Darling to rebound in a big way in his return from injury after a dismal season last year. Petr Mrazek and waiver acquisition Curtis McElhinney haven’t gotten the job done to this point. If Darling can’t improve the goaltending situation in Carolina, a trade is going to be at the forefront here as this franchise can’t afford to waste this wonderful start and league-best advanced stat figures.

For now, it’s been fun watching a young and skilled Hurricanes club go to work.

Well, the Coyotes are just 3-5-0 through eight games this season, so perhaps their spot in the standings isn’t all that surprising.

That said, this team has played extremely well this season with the exception of putting the puck in the net, which will come from a young group.

While they rank dead-last with just 1.75 goals per game on the season, the Hurricanes rank sixth with 421 shot attempts on the season while their 54.5% Corsi For% at even strength ranks them fourth in the league. The Coyotes are outshooting clubs by an average of 7.1 shots per game.

It wasn’t hard to predict this team would struggle to score the majority of the time as young teams tend to do. However, the Yotes’ 35 shots per game ranks fourth and they’re shooting at just 5%. The Blackhawks, for instance, are averaging 35.3 shots per game, but they’re scoring on 10.4% of their shots. The true numbers lie somewhere in the middle, so if the Hurricanes can keep driving possession and getting shots on goal, simple math tells us that the puck will start to go in sooner than later. 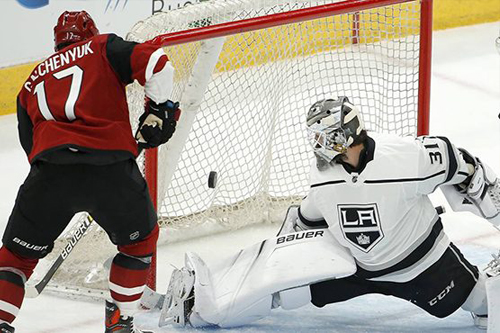 Let’s also keep in mind that prized offseason acquisition Alex Galchenyuk has played just one game this season. He deepens the lineup and will enjoy success with his new club.

There’s no doubt that the Coyotes have a solid six-man defensive group while Antti Raanta is one of the league’s most underrated goaltenders coming off a year in which he posted a 2.24 GAA and a .929 Sv%.

Their spot in the standings isn’t surprising, but I’m surprised at how stout they have been on the back end and it will be interesting to see how this club fares once they get rewarded for dominating the possession game.