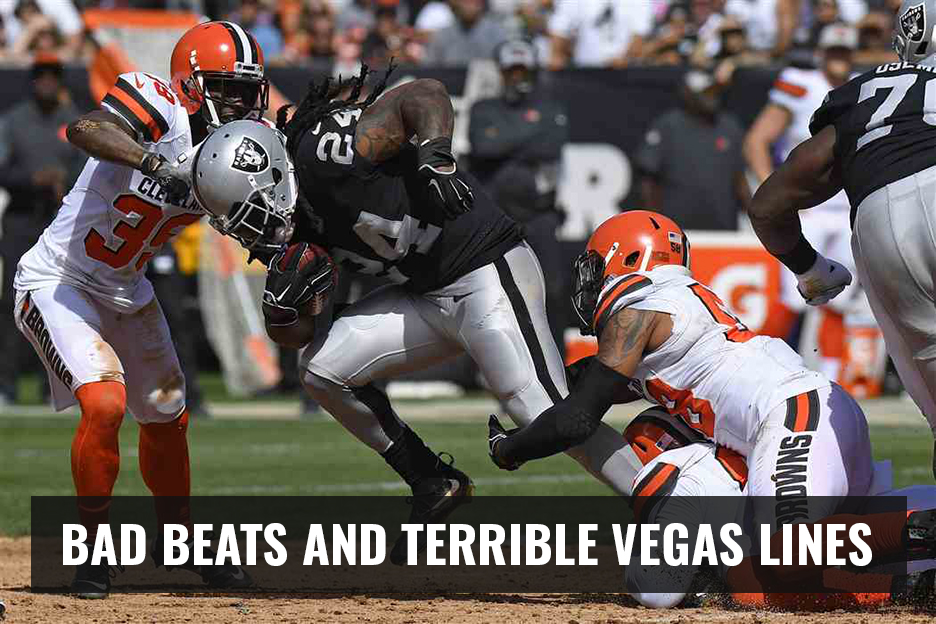 It’s that time of the week again, where I look at the worst wagering moments of this past week’s NFL slate.

Luckily, there wasn’t quite as much to choose from this week. But thanks to the NFL’s apparent desperation to give Jon Gruden a win after another blown lead, I have at least some material to work with.

In other spread devastation, Colts bettors were seemingly given a fatal blow early in the Indy-Houston game. Then once Andrew Luck and Co. made them all think they’d cover the measly one-point spread with a tie, they all but gave the game to Houston instead of taking the “T”.

And let’s not forget about where Vegas went wrong this weekend. With several games not finishing anywhere close and a few games pushing, it was pretty weak overall for the league. But the over/under was where Vegas fell asleep at the wheel.

After sorting through all the games, here are the worst of the bad beats and lines of week 4.

I might as well get this one out of the way, so Cleveland bettors can go through all the stages of grief and put this one far behind them.

The Browns were riding high coming into the Black Hole. They had won their first game since the beginning of the Trump administration and were looking for their first road victory since millennials dressed up as Netflix and Chill for Halloween.

So with an eight-point lead and one first down standing in their way of running out the clock, it seemed Cleveland had it in the bag. Especially against a team—the Raiders—who have made blown leads an art form early this year.

On a third down with 1:41 left, Carlos Hyde appeared to pick up the first down with a cut up the middle. The officials even marked it as so. The replays showed your typical cluster of bodies.

And within all of that, the NFL found that the play should be reversed, and the Browns shouldn’t be awarded a first down. You can watch the play a thousand times and sync up every angle, but that may have not been the most questionable move by the officials on Sunday.

Though it may have seemed to be an egregious call to some, when you’re called the “Factory of Sadness”, you come to expect these kinds of things. And as bad as the call was, Cleveland had a chance to stop Oakland.

But it seemed as if the football gods had already decided to make the Browns their court jester for yet another Sunday.

Cleveland let the Raiders have good field position. They let their average-at-best targets find plenty of space. Then they allowed Oakland to score with a half-minute still to spare, not even making things interesting.

Then Jordy Nelson caught the two-point conversion despite wearing CB T.J. Carrie like a sweater.

Even after Baker Mayfield’s interception near the end of regulation, Cleveland could’ve still covered in OT. But even when the Raiders tried their hardest to falter by missing a straight-on 50-yard field goal, Mayfield’s rendition of Brett Favre got the Browns absolutely nowhere.

Never underestimate what Drew Brees can put up late in games.

With that said, it was 19-10 (Saints winning) with New Orleans deep in their own territory on a third-and-nine. The “over” seemed to be running out of opportunities.

Then Alvin Kamara caught a swing-pass and squeezed through the defense’s hands like a wet bar of soap. The Giants let Michael Thomas do the very same thing on a third-and-seven. Kamara eventually scored and the Saints were up 26-10.

But still, there not only had to be two touchdowns, but also a two-point conversion to push the game over. The Giants had small-balled all day on offense and Eli Manning was bound to let a duck fly when he opened the passing game up.

As for the Saints, they’d just run out the clock when they got the ball back.

But they wouldn’t until Eli Manning was done masquerading as his brother. He had a long completion to Odell Beckham, throwing into a window you could’ve fit both offensive lines through. Then Saquon Barkley scored on a run where he seemed to grow a Michael Jordan Space Jam arm.

The Giants even scored on a two-point conversion that seemed to be busted. But when you give Eli enough time to write a symphony in the pocket, these things tend to happen.

Still, the Saints were draining the clock. The Giants couldn’t stop them from getting first downs and this game was going to be over before the Giants even had another shot.

But the Giants did the worst thing they could’ve done, seemingly giving the middle finger to under bettors. Even though it was clear the Saints were running, and the Giants were loading up the box to stop it, they still opened like the Red Sea for Kamara.

Sure enough, he scampered for a 49-yard score, denting bank accounts and perhaps some drywall too.

I’m putting these all together in one category. Vegas got fooled by some of the losing teams this week. Heck, a lot of us did.

Who saw the field goal-favorite Chicago Bears mauling Ryan Fitzpatrick like he was Leonardo DiCaprio in The Revenant? I sure didn’t and neither did the oddsmakers.

After all, Mitch Trubisky threw six touchdowns in the 48-10 win. For context on how bonkers that is, consider the fact he threw a total of seven touchdowns in 12 games last year. Not even his own mother thought he could throw that many in one game.

As for the Bucs? Unfortunately, they’re probably going back to irrelevancy. But the two weeks of living in FitzMagic World were totally cool while they lasted.

It was also fun to run around like chickens with the heads cut off when the Patriots went 1-2 to start the season. Vegas still gave them 6.5 points at home. The fact that the Dolphins hadn’t beaten the Pats on the road in a decade probably should’ve made that spread a tad larger.

But what was hyped to be a big AFC showdown proved to be as predictable as a re-run of your favorite TV show.

The Dolphins had an opportunity. Not only did they not get the chance to blow it. They didn’t even flop around on shore in much of a struggle. It was 24-0 at halftime and Miami didn’t score until half of Gillette Stadium had left for the pubs.

Lastly, there was the Packers and Bills. Sure, a 22-0 final with an 8 ½-point spread isn’t the worst. But the fact Vegas—and yours’ truly—wanted to make sure Buffalo wasn’t going to challenge Green Bay is a downright bad look.

Everyone should’ve known the Bills were a one-hit wonder. It’s hard to take a much-maligned defense, an inexperienced rookie QB, and a banged-up LeSean McCoy and expect them to contend in Lambeau.

The score doesn’t make it a complete blowout. But it seemed the Bills’ distance from victory was not unlike our proximity to the Sun. Barely getting 200 yards of offense will do that to just about anyone not named Jacksonville.

It’s hard to know which over/under to focus on.

The Vikings and Rams were one point away from going over 48.5 with the entire second half still to play. The Bengals and Falcons went almost three touchdowns over their 52.5 line, and that was after it moved up four points.

The Worst Over/Under of the Week
Must go to Cleveland and Oakland. Sure, the Raiders probably shouldn’t have been in the position to score their final eleven points. And yet, the game still would’ve gone over by 21.5 points.

To be fair, neither of these teams have had much of any success offensively. The Raiders hadn’t scored over 20 points in any of their first three games. The Browns ceiling had been 21 up to that point.

But Nick Chubb had 105 yards on three carries and Derek Carr tossed for 437, putting the under bettors out of their misery pretty quickly.

The two teams turned their opponents’ defenses into cannon fodder in the fourth quarter. And by the end of it all, the Raiders 45 points covered the over/under by itself.