Football is king in the United States, and its popularity is also growing internationally. The NFL has made a serious effort in recent years to increase exposure to its product around the world, and the league has hosted games annually in both London, England, and Mexico City, Mexico.

How well do the NFL playoffs do with television ratings? 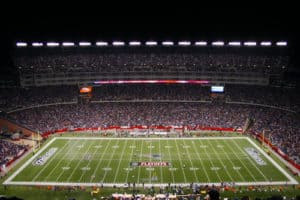 While the regular season draws boffo ratings, those tend to pale in comparison to the postseason. The Super Bowl is the most-watched event on an annual basis in America, and it now draws well over 100 million domestic viewers every year. The most recent Super Bowl, Super Bowl LI, reeled in over 111 million viewers in the United States alone.

It seems as though the NFL’s popularity continues to grow. A divisional round playoff game between the Dallas Cowboys and Green Bay Packers in January of 2017 drew a whopping 48.5 million viewers on average in the United States, which set a new record for the second round of the NFL playoffs. The game peaked in the final two minutes, when more than 62 million sets of eyeballs were on the game.

That came one week after a first-round matchup between the Pittsburgh Steelers and Kansas City Chiefs set a ratings record for that round. An average of 37.1 million people watched that game on the previous Sunday night, with a peak of 39.1 million.

Of course, it helps when two marquee franchises such as Green Bay and Dallas square off against one another.

So, telling you that the NFL is popular in America is actually underselling it a bit. What else should you know about the NFL postseason?

How does the playoff system work?

So, the playoffs are divided between the AFC and NFC for the first several rounds. Each conference includes four divisions: the North, South, East and West. The teams that finish in first place in each of the eight league divisions automatically qualify for a playoff spot.

The two teams that finish the regular season with the best record in each conference are awarded a “bye” in the first round of the postseason. This means that they get an off week and automatically qualify for the second round of the playoffs.

The two division winners in each conference that finish with worse records will square-off against the two Wild Card representatives in the first round. The winners of those first playoff games then advance to face the teams that received a bye for the first round.

From there, the two teams in each conference that wind up winning in the second (or Divisional) round advance to the conference championship games. The winner of the AFC Championship will then meet the NFC champions in the Super Bowl.

So, of the 32 teams that make up the NFL, only 12 qualify for the postseason on an annual basis.

What are some memorable NFL playoff moments?

The NFL has existed for 96 years, so there is no shortage of unforgettable playoff moments. Perhaps the earliest and most easily recognizable moments came way back in Super Bowl III when the New York Jets shocked the world and toppled the Baltimore Colts, 16-7. Jets quarterback Joe Namath guaranteed that the Jets would defeat the heavily-favored Colts, and he certainly delivered on his word. The slow-motion footage of Namath running off the field with his finger in the air is one of the league’s most indelible images.

We would be remiss to ignore the “Immaculate Reception”, as well. The Pittsburgh Steelers trailed the Oakland Raiders late in a divisional playoff game in 1972. Pittsburgh trailed with about 30 seconds to go as quarterback Terry Bradshaw attempted to connect on a pass with John Fuqua. The ball deflected off the hands of Raiders safety Jack Tatum and caromed into the arms of Steelers fullback Franco Harris.

The ball nearly hit the ground before Harris scooped it up and sprinted toward the end zone. He wound up scoring on the play and vaulted his team ahead in the final seconds of a 13-7 victory.

We have the Immaculate Reception, but we also have what will be known forever as simply “The Catch.” Late in the 1982 NFC Championship Game between the San Francisco 49ers and Dallas Cowboys, Niners QB Joe Montana flung a desperation heave into the end zone. Montanan was nearly sacked on the play, but got the pass away before running out of bounds. The pass was high, but not too high for San Francisco wide receiver Dallas Clark, who came down with the ball in the end zone.

That touchdown and the ensuing extra point put San Francisco ahead 28-27 and propelled them into the Super Bowl. The 49ers would go on to defeat the Cincinnati Bengals, 26-21.

Let’s also not forget that the Cleveland Browns were thwarted in back-to-back AFC title games by the Denver Broncos in the mid-1980s. Trailing late in the 1986 AFC Championship, Broncos quarterback John Elway engineered an incredible 98-yard touchdown drive (now known as “The Drive”) that concluded with Elway connecting with Mark Jackson on a five-yard pass that tied the game. Denver would later win the game on a field goal as time expired.

Just one year later, the Browns were victimized by “The Fumble.” With just over a minute left in the game, Cleveland was driving to try and pull the game to within one point. However, running back Earnest Byner fumbled on Denver’s one-yard line and the Broncos recovered. Denver then took an intentional safety and wound up winning the game, 38-33.

“The Comeback” is still the greatest comeback in NFL postseason history. The Houston Oilers led the Buffalo Bills by the score of 35-3 early in the third quarter of their first round playoff game in January 1993. The Bills engineered an insane rally from that point, though, and outscored Houston 35-3 over the course of the second half. Buffalo would go on to kick a field goal in overtime to cap the largest comeback in NFL history. The Bills would go on to lose their third of four consecutive Super Bowls later that month.

The Oilers’ franchise was on the other side of one of the wackiest plays in NFL history just a few years later. After moving to Tennessee, the franchise changed its name to the Titans and pulled off one of the greatest trick plays in the history of the league.

The Bills led the Titans 16-15 in the final moments. On the kickoff that followed the field goal that put Buffalo in the lead, Titans tight end Frank Wycheck took a handoff from fullback Lorenzo Neal before firing the ball all the way across the field to wide receiver Kevin Dyson. Dyson then sprinted down the sideline untouched for the score that put Tennessee back on top. The Titans would go on to win, 22-16, and the Bills haven’t been seen in the postseason since.

The New England Patriots have been on the winning end of some crazy plays, as well. Back in the 2001 AFC divisional round against the Raiders, quarterback Tom Brady was sacked and lost the football in the snow. The Raiders recovered, but replay officials determined that the little-known “tuck rule” was put into effect. It was ruled an incomplete pass instead of a fumble, and Brady would go on to lead the Patriots to a game-winning drive and subsequently their first of many Super Bowl titles.

Over a decade later, cornerback Malcolm Butler instantly put his name on the map by coming up with a shocking interception of Seahawks quarterback Russell Wilson on the goal line that clinched Super Bowl XLIX for the Pats.

Do teams play differently in the playoffs?

This largely depends on the coaching staff. Some coaches tend to play a far more conservative style when the playoffs roll around due to the high-stakes nature of the games. One loss means you’re eliminated in the NFL playoffs, so some coaches tend to be risk-averse in the most crucial games.

“Defense wins championships” is a cliché that holds true for any sport, especially football. While we have seen some high-octane offenses advance deep into the playoffs, most often than not it seems as though defensive-minded teams are the ones that fare the best come playoff time.

So, should a bettor approach a playoff game differently?

As mentioned above, that largely depends on the teams involved. Experience is huge when it comes to succeeding in the NFL playoffs, so backing teams with a lengthy history of recent success, such as the New England Patriots or Seattle Seahawks, may be a prudent strategy.

Inexperienced players or coaches are more likely to wilt under the pressure of the moment. While we have seen countless monster upsets in the postseason, more often than not the cream has a way of rising to the top.

Some will scoff at the notion that “momentum” actually exists in sports, but in some cases it really seems to come into play during NFL playoff games. The aforementioned 32-point Buffalo Bills comeback over the Oilers stands out, as does New England’s huge comeback over the Atlanta Falcons in Super Bowl LI.

If you are interested in placing a live bet on an NFL playoff game, trying to get a gauge on a potential momentum swing is crucial. If you see that one team’s wheels are starting to fall off while another is growing in confidence, that’s typically a good indicator of what will happen next.