Football is the king of sports in the United States and is experiencing growth beyond American borders, as well. However, just because it’s popular doesn’t mean you necessarily know anything about it.

If you’re interested in hopping on the bandwagon and getting into American football, what do you need to know ahead of time? 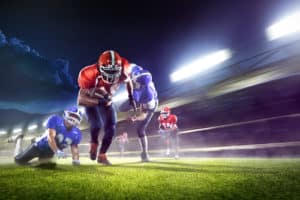 Football has a bunch of complicated rules, and there are differences between the National Football League and college football. We’re going to do our best to try and simplify things in this space. The object of the game is to score more points than your opponent. Everything make sense so far? Good.

Football teams are comprised of three components: offense, defense and special teams. Obviously, the offense is tasked with trying to score as many points as possible, while the defense is out there to try and prevent that from happening.

Both teams have 11 players on the field at all times. Playing with fewer or more than the required 11 results in a penalty. We’ll go more in-depth on penalties later on.

The football field is 100 yards long with a 10-yard end zone at each end. In order to score, a team must have a player carry the ball across the goal line and into the end zone. This is called a touchdown, and it is worth six points. You may pass the ball or run it into the end zone to score.

There are a couple of other ways to score, as well. A team may kick a field goal, which entails a kicker kicking the ball from a spot through the uprights set up at either end of the field. A successful field goal is worth three points.

However, a team may also choose to try and run (or throw) the ball across the goal line for two points. These conversion attempts take place from the two-yard line in both the NFL and college football.

The only other way to score points in football is via a safety. A safety occurs when an offensive team is tackled with the ball inside their own end zone. This awards two points to the defense, and the team that allowed the safety to happen is subsequently forced to punt the ball back to the opponent afterward.

The offense is tasked with moving the ball down the field in 10-yard intervals. Plays are divided into “downs,” and each team has four chances to try and gain a first down. The first down marker is placed 10 yards downfield from where a team starts a possession. If the offense is able to move the ball 10 or more yards within the span of four plays, they get a new set of four downs. If they fail to achieve a first down in the span of four plays, possession of the ball is switched to the opponent.

In most cases, a team will choose to kick the ball after three down if they feel they are unlikely to get a first down on the fourth play. If a team is close enough to do so, teams will typically attempt to kick a field goal on fourth down. If they are too far from the goalposts to attempt a field goal, a team will punt the ball to an opponent in an effort to keep them as far away from the end zone as possible when possession of the football changes teams.

Once a ball carrier’s knee hits the ground, the ball is spotted exactly where the player went down. 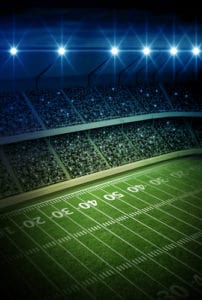 In football, everything really begins and ends with the quarterback. The quarterback is tasked with leading the offense. He will take the ball from the center to start every play, and he will also relay the play calls from the coaches to the rest of his teammates during the pre-play huddle.

Tom Brady, Joe Montana and Peyton Manning are three of the most decorated quarterbacks in the history of the sport. Those three have combined for 11 of the 51 Super Bowl championships all-time.

He is protected by a five-man offensive line. These are typically five massive people whose primary purpose is keeping the defensive players from charging into the backfield and disrupting the play. The center is at the middle of the line, and he is tasked with snapping the ball to the quarterback to begin every play. Wide receivers typically line up on the outside near the sidelines and try to catch passes from the quarterback.

The running backs will take hand-offs from the QB and try to run the ball straight at the opposing defense. Kickers do exactly what you think they would: kick field goals. Punters are typically different from kickers, and they will punt the ball to the opponent in an attempt to pin them further back downfield.

The defensive line goes straight at the offensive line on every play. Defensive ends and defensive tackles try to force their way into the backfield in an attempt to get to the ball carrier or quarterback as quickly as possible.

Linebackers line up directly behind the defensive line. Sometimes their objective is to rush the passer (also known as blitzing), and sometimes they drop back into coverage to try and defend pass-catchers. Defensive backs tend to be the smallest and quickest of the defensive players. They spend most of their time chasing wide receivers around the field.

Managing the clock is a crucial aspect of football at both the professional and collegiate ranks. Both NFL and college games are comprised of four 15-minute quarters.

The play clock is designed to make sure the game is played at a decent pace. From the second one play ends, the play clock is reset to 40 seconds. So, the offensive team must start the next play within 40 seconds of the last play ending, or else they will be penalized.

Each team has three timeouts to use in each half, as well. Timeouts do not roll over from the first to the second half, so if they aren’t used they just go to waste.

If the game is tied at the end of four quarters, the game will go into overtime. Overtime rules are different in the NFL and college.

In the NFL, teams will play one 15-minute overtime period. The first team to score a touchdown in overtime automatically wins the game. If the team that gets the ball first kicks a field goal, the opposing team has one possession to try and tie the game with a field goal of their own or win it with a touchdown.

After the first possession, any score of any kind ends the game. If the game is still level at the end of overtime, the game ends in a tie.

College rules are completely different. There is no game clock in college overtime. Instead, each OT period consists of one possession for each team starting at the opponent’s 25-yard line. If the team that gets the ball first scores a touchdown or kicks a field goal, the opponent will have an opportunity to match or better that result.

If the game remains tied after both teams have had a possession, another OT period is played with the team that started on defense in the first session getting the ball first in the second. This process repeats itself until a winner is declared.

Starting in the third overtime period, teams are required to attempt a two-point conversion rather than attempt to kick the extra point.

Penalties are a huge part of the game. Some are more severe than others, however. For example, a particularly violent penalty can result in a 15-yard deduction for either team. Some penalties result in automatic first downs for the offense, while other, minor infractions may cost a team just five yards.

Block in the back: A blocker contacting a non-ballcarrying member of the opposing team from behind and above the waist: This is a 10-yard infraction.

Clipping: A blocker contacting a non-ballcarrying opponent from behind at or below the waist. This is a 15-yard infraction.

Delay of game: This most frequently occurs when the offense lets the play clock run out before snapping the ball. This is a five-yard infraction.

Face mask: Grasping the face mask on the helmet of an opposing player while attempting to block or tackle him. This is a 15-yard infraction.

False start: This occurs when a member of the offense illegally moves or flinches prior to the ball being snapped. This is a five-yard infraction.

Helmet-to-helmet collision: The act of hitting another player’s helmet with your own helmet. This is a 15-yard penalty that may result in ejection of the offending player in the college game.

Holding: Illegally grasping or pulling an opponent other than the ball carrier while attempting to block or defend another player. This is a 10-yard infraction.

Horse-collar tackle: This is a relatively new rule that penalizes a player for tackling a ball-carrier by the collar of his jersey or inside of his shoulder pads. This is a 15-yard infraction.

Illegal hands to the face: Illegally pushing or hitting an opposing player on the head or helmet. This is a 10-yard penalty in the NFL and a 15-yard infraction in college.

Offside: This occurs whenever a player is on the wrong side of the line of scrimmage when the ball is snapped. This is a five-yard penalty.

Pass interference: Making physical contact with an intended receiver after the ball has been thrown and before it has been touched by another player. This is a spot-of-the-foul penalty in the NFL and a 15-yard penalty in college.

Roughing the passer: This occurs when a defender hits or tackles the quarterback after a pass is thrown. This is a 15-yard penalty.

Roughing the kicker: Occurs when a defender runs into or tackles a kicker or punter after the ball has been kicked away. It is a 15-yard penalty.