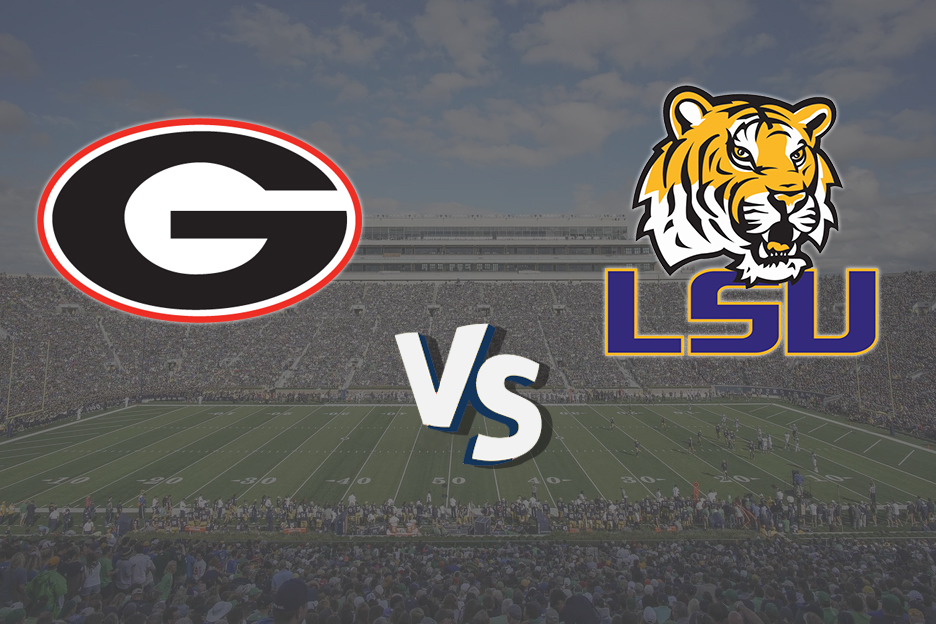 The Georgia Bulldogs and LSU Tigers have had two completely different first-halves, even if their records don’t exactly show it.

No. 13 LSU (5-1) has built quite the resume, with wins over #16 Miami and #21 Auburn, who were both ranked in the top 10 when LSU beat them. And they’re certainly playing over their heads, at least compared to their preseason expectations.

For Georgia, they’ve only faced one (barely) top-25 team in South Carolina, who is nowhere near the rankings now. The Bulldogs have seemed to sleepwalk through a couple games but have still torched their weak slate of opponents.

Now comes the week where questions will finally be answered about the Bulldogs, and the plausibility of LSU’s playoff chances will be revealed.

Death Valley will be rocking as the Tigers look to rebound from their loss to Florida last Saturday in The Swamp. Their season, at least as a championship contender, would be crushed by another loss. They will come out as hungry as ever at home.

Georgia has something to prove as well. And their window for the CFP is already tight with Alabama likely looming down the road in the SEC Championship.

First, they have to get there. And that first resounding step toward Atlanta comes on Saturday.

Even after the loss to Florida, there’s not much to fix for LSU.

What did the Tigers in was the surprising ability Florida had controlling the line scrimmage on both sides of the ball, and a couple great plays by their secondary.

The latter of the two LSU and Joe Burrow really couldn’t do a whole lot about. The first problem, though, is a little bit concerning.

The Gators front-four alone wreaked havoc on LSU’s O-line. But some exotic blitz packages threw the Tigers off even more. This is something LSU needs to patch up quickly, though they hadn’t been having many problems on the line until last Saturday.

They gave up five sacks and were susceptible to edge rushers like Jachai Polite and Vosean Joseph. In the five games before that, the Tigers had given up only eight sacks. That average of 1.6 would’ve put them at 46th in the country, not bad in a league with some great pass-rushers.

Still, the O-line did dictate the flow of the ground game early.

Nick Brossette had another fine game, with 95 yards, a pair of scores, and 6.3 yards-per-attempt (YPA). He has a YPC of nearly 5.0 and eight rushing touchdowns already in 2018.

Statistically speaking, the LSU rushing attack doesn’t look dominant (52nd in yards-per-game). And Brossette may not be Leonard Fournette or Derrius Guice. But he has strong field vision and cutback skills to make up for his lack of game-breaking speed.

Something that’s progressively made the run game work is the balance they’ve found with Joe Burrow at quarterback. Once again, there aren’t incredible statistics here. At Florida, he failed to reach 200 yards and threw two late picks against zero passing touchdowns.

But he has been a highlight against lesser secondaries and rarely makes bad decisions. For example, he didn’t have a single INT coming into the Florida game.

And he was aware of the corner on the first Gator INT and simply couldn’t beat him with the throw. The second pick was at a time where he had to force the ball downfield. He had already made two impressive completions just before to extend the final LSU drive.

Overall, Burrow may not be a savior of sorts at QB. But he’s the best player LSU has had at the position in a quite a while. And he’s a true difference-maker at QB, between the smart plays he makes and the discipline he shares with the rest of the offense.

And I was wrong about their receivers. They were ready to make an early impact. Justin Jefferson is the real deal, and there are six receivers contributing near or above 100 yards already. And only one of them is a senior.

But what’s really driving LSU (again) is their defense, more specifically their secondary.

Only one quarterback has over 260 yards passing against them. Only one has thrown for more than one touchdown. And altogether, opposing starting QBs have only a 53% completion percentage.

LSU is 17th in defensive passing efficiency and are propelled by cornerback and future first-round pick Greedy Williams. He has plenty of help at safety too. But having Kristian Fulton out on the other side has been a big loss. Even so, the Tigers have more than survived without him.

The only real concern would have come at linebacker. Losing a difference-maker like K’Lavon Chiasson (knee) for the season was a big deal. And that was in the first game of the season. But now Jacob Phillips (37 tackles, 3.0 for a loss) should be back after missing the Florida game.

The Tigers need to be better in the front seven. They’re decent when it comes to pressuring the pocket, but they’ve often been pushed around in the trenches and can’t clog the run lanes.

They gave up 217 yards and 5.3 YPA to Florida on the ground and allowed 96 and 6.0 to Ole Miss’s Scottie Phillips the week before. There’s only one starting RB that had less than 4.7 YPA against them, even allowing 5.8 (on 11 carries) to Lorenzo Nunez of Southeastern Louisiana.

The run defense hasn’t proven to be the downfall of this team. But it could against a run game like Georgia’s.

They’ve had little competition so far. And they’ve seemed only half-interested in some of their games.

Still, there’s a lingering thought with this team. And that’s that they seem to be the only SEC program that can truly match-up against Alabama. Their young nucleus of players is right up there With Bama’s and Ohio State’s.

But first, they have to get past an LSU team fighting for their playoff lives. And in one of the toughest places to play, no less.

There’s a reason why I highlighted the lacking LSU run D. And that’s because, despite the fact Georgia lost two running backs (Sony Michel and Nick Chubb) in the first 35 picks of the NFL Draft, they still have one of the best stables of runners.

D’Andre Swift led all the conversation coming into this year. But Elijah Holyfield and his 7.4 YPA (432 yards) have been an absolute head-turner. The physicality and burst he has is incredible. And mixed with Swift’s shifty capabilities, they make the perfect tandem.

The only “problem” is, they actually have five guys with over 100 yards and 4.9 YPA. If Zamir White, a five-star recruit, hadn’t torn his ACL, they’d probably have another. Their fourth-leading rusher, James Cook, is a five-star signee and true freshman with 5.5 YPA.

Simply put, this may be the deepest unit in the entire country.

It’s true they’ve only played against one of the top-60 run defenses (Mizzou) in the FBS. But with an extremely bullish and experienced offensive line, UGA can out-muscle pretty much anyone.

Fromm has responded by hitting timely throws and making very few mistakes. And that’s all Georgia needs from him, right along with his poise, leadership, and moxie at the position.

He has all of those and made a couple deeper throws in the Vanderbilt game that shows he’s not just a game manager. When things get tight in a game like this and the defense is loading the box against the run, Fromm can make the clutch throws down the field.

Riley Ridley (brother of Calvin) and Mecole Hardman are both All-SEC talents. Swift is invaluable as a check-down or swing-route receiver to pick up big yardage after the catch.

Jeremiah Holloman is another guy with secondary-busting talent and a 6’2”-200lb frame on top of it. Even the UGA tight ends can be counted on to move the chains with sure hands.

Georgia’s Offense:
Doesn’t have many flaws. There’s more depth on theirs than possibly any team in the country. Fromm isn’t Tua Tagovailoa or Dwayne Haskins by any means. But he’s more than capable of being a National Championship-caliber QB.

And if he isn’t, they could just go to the 5-star freshman behind him. That sounds like something Alabama would do.

The offense will have more on its plate the rest of the way. Despite the fact the defense is still suffocating, it isn’t last year’s squad. Not many could be.

But they’re still the second-ranked scoring defense in the league. They are 13th versus the pass and place in the top 20 against the run.

Even in situational defense, they shine, with the 15th-best mark on third down and 20th-best in the red zone.

It’s true they haven’t faced an offense with the skill or scheme to challenge them. But not many teams will have either.

Maybe one of the few knocks on them is their so-so pass-rush so far. D’Andre Walker has been a beast early on with four sacks. But besides that, the Bulldogs have just two more QB takedowns. That doesn’t mean they aren’t getting a good deal of penetration up front.

LB Natrez Patrick And DT Tyler Clark have been excellent run-stuffers along with Walker.
The front-seven isn’t as loaded with Roquan Smith and Lorenzo Carter gone. But whatever smidgen of a loss they have there, they more than makeup for it in the secondary.

Florida’s DBs may have been tough for LSU. But Deandre Baker has All-American talent for UGA. J.R. Reed and Tyson Campbell aren’t far behind. There won’t be any reprieve for the Tigers here.

Burrow may have a little more room to breathe this Saturday, something he clearly needed against Florida. That blindside pressure, in particular, was a menace.

But whatever LSU gains there, they may lose it in the ground game. Florida had had some struggles already in that department, and it was the one thing the Tigers could occasionally take advantage of. Doing so against Georgia, with mountains for men like Jonathan Ledbetter and Clark up front, will be tough.

And Patrick will be a big disrupter in his own right.

The back end of Georgia’s D can cover the talented but young LSU receiving group. It’ll be a good battle, but the Bulldogs have a sizeable advantage here.

As for the other side of the ball, don’t expect Georgia to be asleep at the wheel. The Tigers will be playing plenty of one-on-ones with UGA wideouts since they have at least one CB in Williams they can rely on. They will load the box to shut down the run, because they have no other choice.

In the end, though, there’s just so much depth on this Georgia squad, especially at RB. They not only have fresh legs to put in late in games, but most of those fresh legs belong to blue-chip talents.

LSU’s size and sheer desire can keep them in this game for up to three quarters. But they don’t quite have the numbers or game-breakers to take down Georgia.

Their only chance is to jump on them early with the Valley’s eardrum-shattering atmosphere and then hold on for dear life.

But I’m looking for the Bulldogs to stay undefeated, despite the crowd giving the Tigers an early advantage. And I think they’ll pull away late, covering the spread and winning by 10.