The over/under bet – along with the spread and moneyline – is one of three basic wagers you can make. It’s a single bet based on picking between one of two outcomes in one game. Each of the three wager types are winnable in the long run.

The concept here is simple. By placing this bet, you are trying to project the total number of points that will be scored in a given game or match. Typically, you will see the implied total listed alongside the point spread and moneyline when you take a look at a game listed on the schedule.

We can use Super Bowl LI as an example. The over/under for the New England Patriots and Atlanta Falcons is listed at 59.5. This is exceptionally high for an NFL game – it’s the highest projection in the history of the Super Bowl – but it means you can place a bet on whether the two teams will combine to score more or less than 59.5 points in the game. 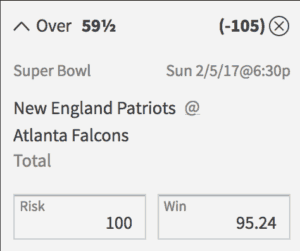 Patriots vs. Falcons at Bovada.

In addition to the total points the teams will combine to score, you can also bet on an individual team’s implied total. Let’s say the Falcons are expected to score 27.5 points. The same rules apply here. If you think they will score at least 28, then hit the over. And vice versa.

Over/under betting does not simply end with team totals, however. You may also be interested in placing prop bets regarding individual player statistics.

You can bet on just about everything when it comes to the Super Bowl, of course. Prop bets are what make the game even more entertaining than it would normally be. If you think Tom Brady is a lock to surpass 300 passing yards in a given game, you can hammer the over on that and (hopefully) collect a little extra cash.

You can bet on the number of touchdowns, touchdown passes, interceptions, rushing yards, receiving yards and just about anything else you can think of. There are several sources of statistics for football such as Pro Football Reference, ESPN and NFL.com.

Basketball is the sport that obviously brings the most scoring. Most NBA teams average over 100 points per game, so most implied totals stretch well into the 200s.

For example, a game in mid-January between the high-powered Golden State Warriors and Houston Rockets had a whopping over/under of 237.5. This is certainly on the high end. A standard high-scoring basketball game would likely see an implied total closer to 220 points.

Games between high-scoring teams like Warriors vs. Rockets tend to have high totals.

As is the case with football, you can bet on player statistics in basketball, as well. Will Stephen Curry hit at least 5.5 three-pointers in a game? Will James Harden score over or under 30.5 points? Will Rudy Gobert block more or less than 2.5 shots?

Unlike football or basketball, there is not nearly as much scoring in baseball, soccer or hockey. This will be the exception in certain games, but more often than not scoring in these three sports tends to be fairly sparse.

Of these three, baseball tends to see the most scoring. Much of the expected scoring in baseball is dependent upon where a game is played. If a game is set to take place at a friendly environment for hitters such as Coors Field in Denver or Globe Life Park in Texas, it is not uncommon to see an implied total reaching into double figures. 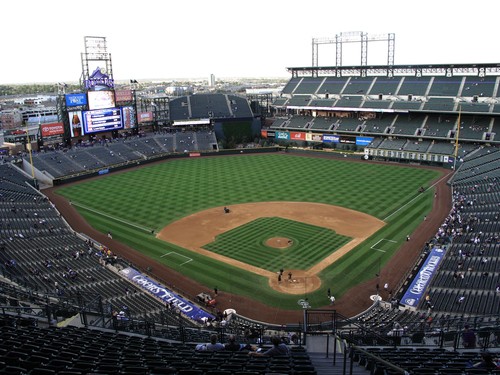 Most baseball games tend to hover around six or seven runs in a standard game in a ballpark that may not be particularly favorable to hitters.

The props exist for baseball players, too. Will Clayton Kershaw strike out more or less than 8.5 players while he’s on the mound? Will Giancarlo Stanton slug over or under 0.5 home runs tonight? The statistical categories are not as wide-ranging as they may be in football or basketball, but you can still get in on that fun here.

Most hockey lines tend to sit in the 5.5 goal range. The NHL has made several rule changes in an attempt to boost scoring throughout the past two decades, failing to increase scoring totals (in fact, there’s been a constant decrease). It is difficult to put the puck in the net, so even the worst defensive teams will typically still be in that 5.5 range.

In most professional soccer leagues, teams score an average of at least two goals per game (the highest league averages are over four goals per game). though that certainly changes based on which teams are involved. A game involving a high-powered team such as Barcelona against a far lesser foe could see an over/under as high as 5.5. If the match is pitting two stingy defenses against one another, though, that over/under can go as low as 1.5.

As is the case when gambling on any sport, doing research in an attempt to familiarize yourself with the game itself is crucial to success.

Does the over/under ever change leading up to game time?

It is not at all uncommon for the bet to change leading up to a game, just as a spread or moneyline will. Bookmakers pay close attention to trends and other factors that may impact the way a game turns out. For example, totals for Super Bowl LI was initially set at 57.5 before jumping up to 59.5.

Paying close attention to injuries, weather conditions and other factors that may affect the way a game is played is highly recommended.

How do I know which teams are more likely to go over or under?

Records of every team’s performance regarding overs and unders are kept all over the place. All you have to do is a quick Internet search to find out how any team typically fares against the implied total line.

If you are betting on football, checking the way a quarterback has fared historically may be a good indicator of future success. If Tom Brady is 18-9 to the OVER, then taking New England on the over, especially in a favorable matchup, would seem to be the wise play.

As you would expect, inclement weather can play a big part in affecting scoring on sports played outdoors. Throwing and catching a football is difficult already, but it becomes quite a bit more challenging when the players are having to fight through snowy conditions or a pouring rainstorm.

Are there any differences between college games and the pros?

When you look at the total bets for the NFL and then for college football you’ll notice they are quite different. More often than not, the NCAA football games are listed with high point totals, while professional games tend to be lower. (See scoring stats for college vs. the pros.)

Often NCAA football games feature teams that are mismatched and one club will run up the score. Scores often escalate in college football in order for a team to show its superiority and gain a higher national ranking. In the NFL, it tends to be tougher to drive up point totals because teams are more evenly matched and also it doesn’t matter how much a team wins by because a win in the pros is simply a win whether it’s by one or 30 points.

Is this a good bet?

If you do your homework and can make a reasonable determination on a given game, the answer is yes. You’ll find totals bet opportunities in every sport where teams can score an unlimited amount of points. Don’t feel compelled to bet on every opportunity. Pick and choose the games that seem to offer the clearest choice.