The Biggest UFC Pay-Per-Views of All Time

I happened to look at a list of the highest pay-per-view numbers in the UFC’s history the other day. Even though the UFC seems to be more popular than ever (they had a record PPV year in 2016), I was surprised to find out that six of their highest-selling pay-per-views took place seven years (or more) ago. 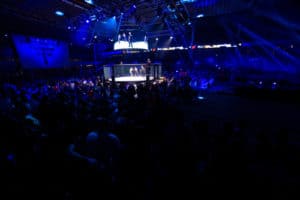 The other four happened either in 2015 or 2016, so there was a 5-year period during which the UFC failed to put on a single PPV event that make it into their top-10 PPV’s of all time. Even if you exclude the events from 2015 and 2016, only one event within the past six years makes that list (”Weidman vs. Silva 2”).

Even though the UFC is a huge brand (recently sold for $4.2 billion), it relies on star individuals when putting on PPVs. It takes more than the UFC’s name to have people spend $50+ on a single event.

From 2008 to 2010, the UFC relied mainly on Brock Lesnar to produce their biggest numbers. Lesnar already had a significant fanbase from his show wrestling career in the WWE, and someone as legitimate of an athlete, charismatic and high-profile individual as he is appealed to the fight crowd.

Unfortunately, as he made his comeback in UFC 200 (the fifth highest-selling PPV of all time, no less), Lesnar popped for using banned substances.

However, that was the Lesnar-era.

From that point on, Georges St-Pierre was the only fighter to be able to put on big shows consistently. He’s headlined five events in the UFC’s top-25 PPVs, however, he was never able to crack into that top-10 (St-Pierre’s highest-selling PPV, ”UFC 158: St-Pierre vs. Diaz,” is currently #14 on the list with 950,000 pay-per-view buys).

During the St-Pierre-era, only Anderson Silva was able to put on big shows – one with Chael Sonnen and once with previously mentioned Chris Weidman.

After St-Pierre and Silva, the UFC has only been able to develop two big stars who helped to put on seven of their top-20 biggest pay-per-views of all-time.

Ronda Rousey made women’s MMA mainstream. She has headlined two big pay-per-views, one with Bethe Correia (UFC 190), and one with Holly Holm (UFC 193, which currently ranks as the #7 UFC PPV of all time) in which she lost in a devastating fashion.

The man of the moment, however, is Conor McGregor. He has headlined five events of the current top-20 PPVs, and three of the top-5 PPVs. He is, without a doubt, the PPV King of the UFC, and since Rousey has likely retired from fighting, McGregor is just about the only hope the UFC has right now.

Losing to Diaz didn’t seem to hurt McGregor’s brand, either, since his rematch with Diaz was the #1 UFC PPV ever, at a whopping 1,650,000 PPV buys (their first fight ranks #2 on that list).

Then again, from a fighting fan’s point-of-view, the UFC does put on better events consistently, and they often have a good card all the way from prelims to the main event, whereas boxing events are known for lackluster undercards even if the main fight draws a lot of attention to itself.

It’s also worth noting that comparing current UFC pay-per-view buys to the ones that took place seven or eight years ago is not entirely fair. Nowadays, the UFC’s distribution model is more complex (they have a deal with Brazilian free TV channel Globo, and a deal with Viaplay in Nordic countries in which you can buy a fight package or a total package, making it impossible to translate these numbers into PPV buys).

In reality, the average UFC event probably has more viewers than ever, and if the current top PPVs were distributed in a similar fashion to seven years ago, I assume we’d now see higher numbers.