Why You Should Bet on MMA

I’ve been following mixed martial arts for the past eight years. And by ”following,” I mean being in that world every day, watching fights and following news. I’ve also bet on sports as long as I’ve followed the sport. 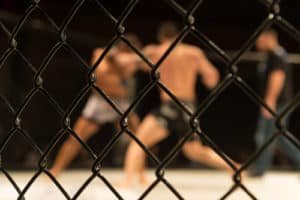 I’ve seen some extraordinary betting opportunities in the sport. Perhaps because I’ve been so into it, perhaps because oddsmakers tend to make some big mistakes with their pricing.

Granted, this may be what happens in all sports — I’m just more familiar with MMA than anything else, so I recognize it in this sport quite often.

One of the things I continue to be surprised by is how the popularity – or ”momentum” – of fighters affect their odds. As I’ve explained on the introduction page, styles and circumstances make fights.

A fighter on a winning streak may perform better than a fighter coming out of a loss — you’d think the confidence level is higher, at least — but the oddsmakers often fail to understand how big of a part of that winning streak was due to fighters having the right kinds of opponents. You can fight top-ranked fighters who are almost tailor-made to suit your style, and then you can fight nightmare match-ups.

When fight promotions see star potential in their fighters, they tend to build these fighters up with suitable match-ups, which is logical. You don’t want to throw your new, inexperienced fighters straight to the wolves.

And eventually, if you keep on winning, you will be thrown to the wolves. With a long winning streak, vicious knockouts, and momentum on your side, you may be a significant favorite over your opponent. Perhaps your opponent may even have lost his or her last fight. You’re riding high. And then… a huge shock.

It’s amazing how great you can look when matched up against the right opponents — stylistically speaking, of course. And you have to consider the false confidence that comes from fighting the right opponents. Maybe you didn’t take your next opponent that seriously — it’s all been easy work previously, right?

Then you get to the fight and nothing works. The opponent doesn’t really care about your hype, momentum or knockout power. You’re taken down within the first minute of the fight, and after a couple of grappling rounds, you’re exhausted. You don’t have the energy to throw a punch even if you had the chance.

A famous example of this is the first fight between Anderson Silva and Chael Sonnen. It’s not a perfect example, since Silva managed to pull-off a miracle submission within the last couple of minutes of the five-round fight. Other than that, though, we saw a previously dominating fighter get dominated for almost five rounds.

To Silva’s credit, he eventually faced Sonnen again and beat him in the second round.

Then Silva faced another wrestler, Chris Weidman, and lost. It was a knockout loss, after Silva got careless when trying to lure Weidman to overextend himself and get caught with one of Silva’s trademark counter-strikes. Sure enough, Weidman did overcommit but he did it at the right time and actually landed the punch. And then another punch.

And Silva went down.

Stylistically, Weidman was the perfect storm for Silva. He was a wrestler and a gifted ground fighter. Just as importantly, though, he wasn’t at such a big of a reach disadvantage as Silva’s previous opponents, and he knew how to handle distance on the feet (another skill that most of Silva’s past opponents lacked).

Still, the oddsmakers significantly favored Silva. Even though Weidman himself was much younger, undefeated, and as mentioned, stylistically a nightmare match-up for Silva.

Want to know something crazier?

After only six months, they had a rematch, and Silva was still the favorite. After not getting anything done (except for a few leg kicks) in the first fight and getting knocked out in the second round — again, that happened only six months before the rematch took place — he was still riding the high in the eyes of the oddsmakers.

That’s the beauty of betting on MMA. Sometimes the linemakers are clueless regarding how skills match up and focus too much on fighters’ records, momentum and mystique.

The other reason to bet on MMA fights is that local shows have great betting lines from time to time. If you really take your time and study all the fighters, you might find some terrific opportunities. Since these betting lines have generally been scouted so poorly, though, the bookmakers rarely allow you to bet big sums of money on them. But you can make decent money if you do your research.

To conclude, focus on fighters that are riding on the momentum of their past wins. What kind of opponents did they beat stylistically, though? And focus on local MMA shows — you might find some awesome, mispriced opportunities there.