I wanted to write a list of the most entertaining active UFC fighters for those who are not that into the sport and want to see some exciting fights to better get into it. After thinking about it for a while, I was surprised to realize that only few fighters stand out out of the hundreds of fighters in the roster. 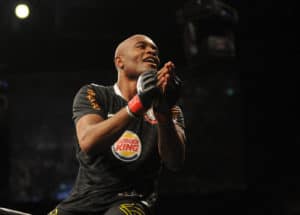 There are plenty of fighters that I like to watch (or at least don’t mind watching), but if I think about it in terms of ”this fight is going to be awesome” or ”this fighter will do something exciting”, I was only able to think of a couple of examples.

There are certainly some exciting match-ups, but a single fighter who can make an event exciting on his own, like Tito Ortiz, Chuck Liddell, GSP, Anderson Silva, etc. used to be able to do?

The skill level and athleticism of fighters has never been on such a high level. At the same time, the sport currently lacks entertaining and exciting personalities.

No wonder the UFC applied for a drug testing exemption for Brock Lesnar so that he was able to appear in the historical UFC 200 event (and ended-up failing not one but two drug tests). The sport makes money when it finds ways to entertain its fans, and it really lacks excitement right now. When it comes down to it, it’s the fighters that make an event exciting, not the fact that it’s an event by the UFC.

Just look at the pay-per-view numbers. When a big name or an exciting match-up (or in most cases, both) headlines, the UFC sells multiple times as many PPVs as it usually does.

Of course, the hardcore fans care little about the personality. Whose fights are exciting?

We really look forward to fights when we either find a fighter exciting or want to see the fighter either win or lose. Georges St-Pierre, one of the biggest stars the UFC’s ever had, never really had exciting finishes in his biggest fights, but people were emotionally invested in either seeing him win or lose.

Just look at all the decisions on his fight record:

Then you have fighters like Anderson Silva, who only had a few ”boring” fights in his career, and were finishing machines (even better, the finishes were exciting). Curiously, he became a household name only after his fights with Chael Sonnen. You could argue that the best part of his fighting career was already behind him at that point. (Silva’s record before the first Sonnen fight was 28-4; his record after the fight is 5-4-[1] so far.)

When it comes to decisions, by the way, Jon Jones hasn’t won a fight by stoppage since 2013 — in other words, he hasn’t finished any of his opponents in four years (granted, he’s only had four fights within that time).

I still consider him to be one of the most entertaining fighters in the roster because of the way he dominates his opponents and shows us wonderful, unorthodox techniques. Even though he’s done awful things in his life outside fighting and tested positive, he’s simply an exciting fighter to watch, and perhaps the best fighter to ever have lived.

The biggest name in the world of mixed martial arts (and perhaps the world of fighting in general) is Conor McGregor. While his personality is a major part of the success he’s achieved in such a short amount of time, McGregor is perhaps the most exciting fighter in the roster. It’s a rare combination to have the right personality and, simultaneously, the right style.

He always goes for the finish, the only exception being his fight against Max Holloway in which he injured his ACL and was subsequently out for over a year.

Let’s look at the current top pound-for-pound list published by the UFC. Anyone there that matches the description of having an exciting style of fighting?

Demetrious Johnson is the #1 fighter on the list. He’s been dominating his division since 2012 and certainly deserves to be called the #1 pound-for-pound fighter in the world.

Perhaps there’s something about the flyweight division, though – the size, the movement, and the rare finish rate – that fails to excite fans at large. The hardcore fans may disagree, but I wouldn’t show an MMA newbie a Demetrious Johnson fight as an introduction to how exciting the sport can be.

As as we look at the pound-for-pound list, I already wrote about McGregor so the next-up is Daniel Cormier. He’s only lost to Jon Jones (who, by the way, is not on this list due to failing a drug test). Cormier is one of the best fighters on the roster and could be a heavyweight champion if it wasn’t for his teammate Cain Velasquez competing for a title in that division.

However, Cormier is a wrestler. He’s not a boring fighter, but he lacks the exciting finishes to be considered an extremely entertaining fighter. He will dominate you by taking you down or pushing you against the cage and, as he likes to say, ”embracing the grind”. It makes sense, too — why would you take the risk of getting into striking exchanges (although he’s done that successfully as well) if you have a safer and more efficient way of getting the job done?

Good for Cormier. But I wouldn’t show his fight to a newbie, either.

Next on the list is Jose Aldo, one of the most dominating fighters in the history of the sport. He reigned undefeated for almost a decade. His winning streak came to an unexpected end as he got knocked out by Conor McGregor with no more than 14 seconds into the fight.

Aldo has showed us impressive technique and athleticism throughout the years, but ever since he became a champion, he’s been known to coast his way to a victory. He only brings out the best version of himself when he’s pushed into doing so (his second fight against Chad Mendes, for example, is one of the most exciting fights of his career).

Look at all the finishes early on in his career. 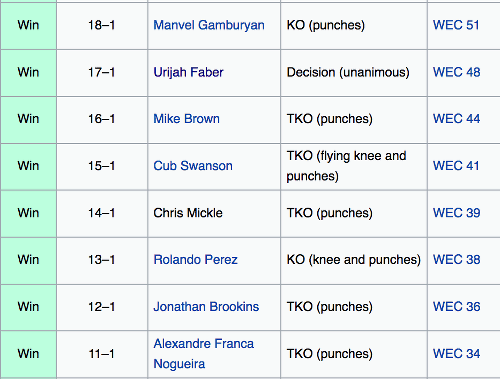 And then look at how his UFC fights have ended. (True, the competition has been tougher in the UFC, but he’s clearly being more careful nowadays.) 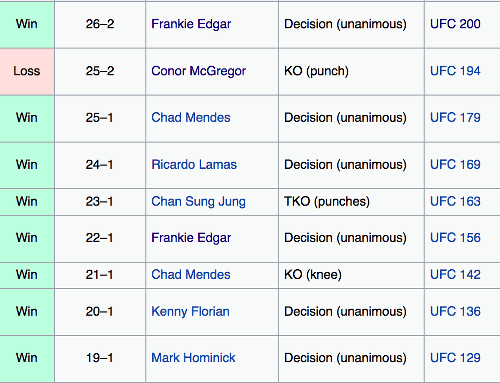 I wouldn’t show Aldo’s upcoming fight to a newbie, either, considering the likelihood of that fight being quite uneventful, albeit some flashes of brilliance.

Anyway, you get the point. Skills don’t necessarily translate into entertainment and excitement.

Outside of Top Rankings

Is there anyone outside of the top rankings you should watch?

I’ll just name a few fighters who always ”bring it” in an entertaining fashion.

Tony Ferguson. Known as ”the Ghost”, Ferguson moves forward and goes for the kill. He may not have the cleanest technique, but he’s tough and has unorthodox technique. Always an interesting fighter to watch.

Yair Rodriquez. He’s making headlines and getting noticed even though he’s only reached the 7th rank in the featherweight division. When a fighter gets noticed before reaching the top of the rankings, there’s usually something special about him or her. Rodriquez has defeated each of his UFC opponents so far while showng some beautiful striking technique.

Cody Garbrandt. The newly crowned king of the bantamweight division. He beat Dominick Cruz, who was undefeated for X years (although Y of them injured) before facing Garbrandt., and showed his exciting style of fighting in not only offense but defense (he had impressive head movement in the fight). I’ll be sure to tune into his first title defense.

Stephen Thompson. In a rare outcome, Thompson recently fought for the welterweight title against current champion Tyron Woodley and the fight was a majority draw (Woodley remains as the champion). The two will soon face each other again, and Thompson will surely bring his unorthodox, karate style of fighting with him.

Luke Rockhold. Rockhold beat Chris Weidman and became the middleweight champion. In the following fight, he faced Michael Bisping (a clear underdog) and, surprisingly, lost the fight via a technical knockout (TKO). I’m looking forward to Rockhold’s return since he always brings an offensive style regardless of where the fight goes.

Anthony Johnson. A light-heavyweight contender, Johnson has what might be the most devastating striking power in the whole UFC roster, including the heavyweights. Remarkably, Johnson used to cut weight so much that he’s competed in the welterweight division. It’s hard to imagine how that’s ever been possible when you look at him now. If Johnson lands a punch on you, you’re going down.

Fabricio Werdum. He used to be purely a jiu-jitsu fighter but after spending several years on his striking technique, Werdum has become one of the better strikers of the heavyweight division. Fortunately, his striking technique is entertaining, too. Even better, his opponents have to worry about being take down and going to the ground, which in turn makes his striking more effective.

Cain Velasquez. Combining wrestling with striking (or the other way around), Velasquez pushes on and relentlessly goes for the finish. He’s always fun to watch.

Francis Ngannou. A heavyweight prospect with terrifying power. Watch out!